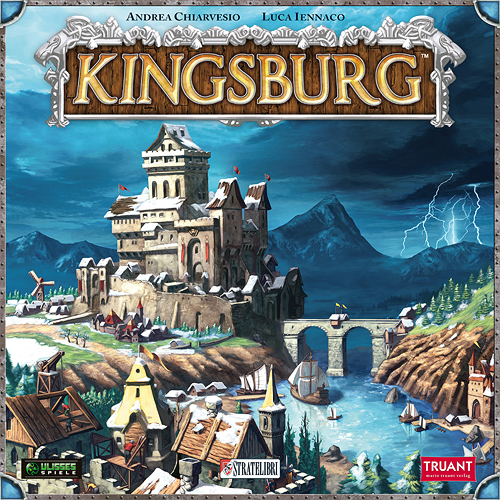 The realm of Kingsburg is under attack!  Monstrous invaders are gathering at the borders, aiming to invade and plunder the realm.  Your King has chosen you to take charge of a province on the border; you will manage your province and help defend the realm.
Kingsburg is a city building, worker placement game with a twist.  The game is played over 5 years with each year divided into 8 phases.  At the start of each year and after determining which player will receive aid from the king, all players roll their dice simultaneously.  The dice become the workers to be placed carefully on some of the king’s 18 visors.  Each advisor helps the player who influenced him by granting gifts.  These gifts range from victory points, resources, armies, etc.  Resources are used to construct buildings and to build an army.  Buildings five abilities throughout the game and score victory points as they are constructed.  Armies are necessary to fend off the enemies that appear at the end of each year.  Additionally, the king will appear during the year to bestow rewards on the strongest player and aid on the weakest player.  The player who rolls well, plans well and pleases the king will gain the most victory points.

We have an open copy of Kingsburg available in our Store Demo
Games Library for you come in and try.