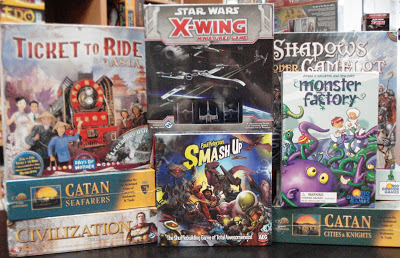 Here are this week’s game arrivals – – some new and some restocks.

Newly released from Rio Grande Games and designed by Donald Vaccarino  (Dominion, Kingdom Buillder, & Infiltration) and Nina Paley is Monster Factory, a silly monster-building game aimed at kids 5 and up.

In Monster Factory players create their own goofy looking monster and possibly some minions.  Each player take turns drawing and placing tiles, either adding to their own monsters or to those of their opponents.  The goal is to make a big monster, but not so big that it goes unfinished.

From Fantasy Flight aimed at those of you who are Star Wars fans is Star Wars X-Wing Minature Game.

X-Wing is a fast-paced dogfighting game set in the Star Wars universe for 2 players.  Join the Rebel Alliance or lead the Galactic Empire.  Whichever allegiance you serve you will control starfighters, outfit them with a variety of pilots, special weapons & upgrades, and attempt to outmaneuver their opponent. The player who destroys all of their opponents ships wins.

Man your ships! And may the Force be with you!

From AEG comes Smash Up a fast-paced shufflebuilding card game that you can’t live without.

What do pirates, ninjas, robots, zombies, aliens, wizards, and some other things have in common?  They’re all trying to take over the world! But they can’t do it alone — so they’re teaming up.

In Smash Up players each chooses 2 factions, smashes them together, and then smash their opponents.  Your goal is total world domination.  Use your minions to crush your enemy bases. Score 15 victory points and win the game.