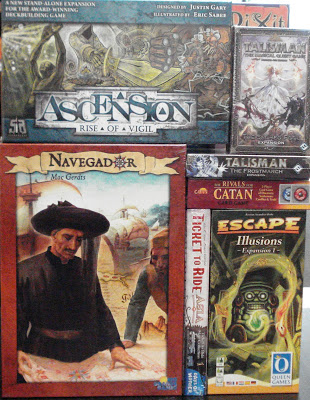 More new games arrived in this week.  Here’s some of this week’s arrivals:

New power stirs in Vigil!  Just out from Stone Blade Entertainment is this new stand-alone Ascension expansion by game designer Justin Gary.  Ascension: Rise of Vigil can be played as a stand-alone game for 2-4 players or combined with any other Ascension deck-building games increasing the number of players to 6.

Rise
of Vigil introduces treasure cards to the game system,
with all treasure cards in this set being “Energy Shard”. When a
treasure card is drawn from the shared deck, you place it in the empty space in
the shared pool, then continue to draw until you reveal a hero, monster or
construct to cover the treasure. When you acquire or defeat that top card, you
also gain the treasure, which is added to your deck like hero and construct
cards. When you play a treasure from your hand, you immediately draw another
card from your deck; more importantly, you can use the energy on these cards to
activate special powers on certain heroes, constructs and monsters…

Navegador is a challenging strategy game for 2-5 players with a little luck, because no one knows exactly what to expect when discovering new sea regions.

Players represent wealthy trade dynasties which take part in building up the Portuguese colonial empire. The first aim is to explore the unknown sea regions and found colonies. Use the sugar, gold, and spice resources in the colonies to finance the building ships, factories, shipyards, and churches. Use a rondel to plan actions and build the best combinations of assets to win.


Watch this video to get a feel for  Navegador