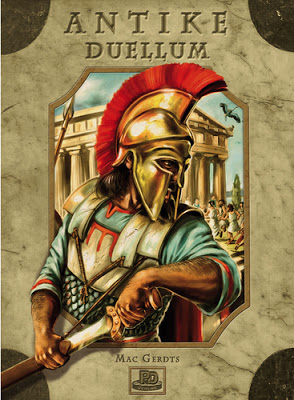 Two mighty, ancient empires sail
the seas, found new cities, erect glorious temples, and develop new
technologies.  However territories and
resources are limited and soon peaceful coexistence threatens to change to military
conflict.  Who can best manage their state
affairs?  Who can benefit their people
most when engaging the vagaries of fate?
And who has the strategic genius to lead their legions and fleets to
victory?  The answer lies in your hands.

Antike Duellum is a 2 player war game with a strong economic element.  A double sided board provides 2 scenarios: Rome
versus Carthage and Greece versus Persia.
The game also incorporates a rondel for action selection.

In the struggle for
supremacy players will choose their actions based on the 8 spots provided on a
rondel.  These actions include a) resource
production of marble, iron, and gold, b) construction of city walls and temples,
c) troop movement, d) armament of military units, e) military recruitment, and f)
purchase of scientific know-how.  Resources
are expended for actions involving military recruiting and armament, erecting city
walls and temples, and acquiring scientific know-how.  Building walls in your cities increases a city’s
defenses while temples will increase a city’s resource production.  Advantages for gaining scientific know-how includes
increasing your military land and sea movements, additional resource
production,  added strength in your
cities defenses, and the ability to trade resources with the bank.  Victory points are
acquired by building additional cities, building temples, acquiring scientific
know-how, the destruction of opposing temples, and the amassing of a large fleet
of galleys.

Antike Duellum moves quickly through the opening rounds as
players build cities and military strength.
It doesn’t take long for things to get interesting as military units don’t
have far to go to get in each other’s way.
Players will need to build a tight economic engine with the cities, plan
their moves on the rondel well and leverage every turn to gain tactical
advantages across the board to be successful.
The first player to outmaneuver their opponent on the way to 9 victory
points will be the winner. 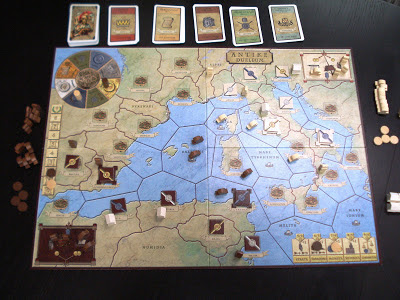 A copy of Antike Duellum is available in our Store Demo Game Library for you to come in and try out while you are here.