Byline  Join the revolt in Rome!

Arena Roma II is a stand-alone 2 player war card game from game designer Stefan
Feld.
The struggle for
predominance in Rome hasn’t been decided yet – the die has not yet been
cast!  In Arena Roma II players use character cards and building cards
to populate their side of an icon bar.  Each of the cards brings a unique ability to
attack, to defend, or to generate victory points.  The object of the game is to either run your
opponent completely out of victory points or to have more victory points than
your opponent when the bank of victory point tokens is exhausted.  One way to make sure your opponent is low on
victory points is to destroy one of their characters or buildings.  The first phase of each turn forces a player
to give back a victory point for each vacant space on their side of the icon
bar.  Three dice are rolled on each turn
to determine which characters or buildings can be activated.  Additionally, the dice can be used to obtain gold
that is necessary to cover the cost to play characters and buildings or used to
draw additional cards into your hand for strategic placement later.
The secret to success is
learning when and where to place characters and buildings to inflict as much
damage as possible on your opponent while amassing victory points for yourself.

A
copy of Arena Roma II is
available in our Store Demo Game Library for you to come in and try out while
you are here. 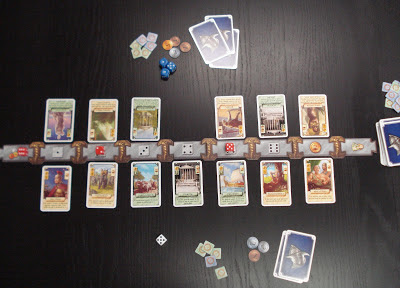