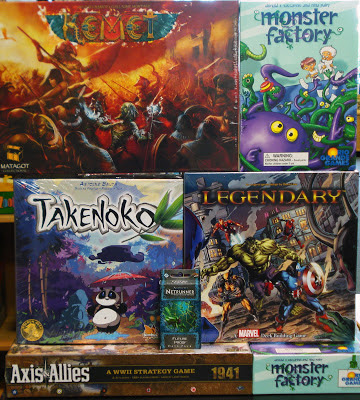 This week’s arrivals includes a few games that are new on our shelves.

Manage an Ancient Egyptian civilization, maneuver your troops to defeat your enemies, control the best territories and enter the legend, thanks to your military exploits!
A game of the same vein as Cyclades, with a strong atmosphere which will transport you to the ancient times. Between battles and magic, be the finest of all the strategists!

Also new in from Asmodee is, Takenoko.

In this game players take on the role of courtesans of the Nippon emperor who have been given the responsibility of caring for his Giant Panda by growing a bamboo plantation.

Their task is to farm parcels of land, irrigate them, and grow green, yellow or pink bamboo with the help of the Imperial gardener.  They will have to bear with the ravenous hunger of the sacred animal for the juicy and tender bamboo.

The player who grows the most bamboo, managing his land plots best while feeding the sacred Panda will win the game. 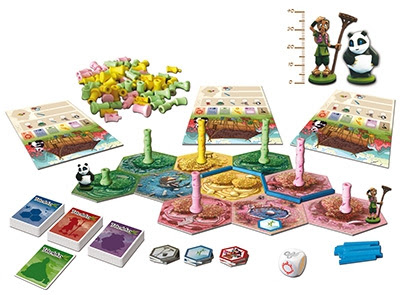 Calling all comic book superhero fans.  Adding to our deck-building games is Legendary: A Marvel Deck-Building Game from Upper Deck.  1-5 players can play cooperatively or competitively to determine the ultimate victor.
Following is a game excerpt from Upper Deck:

…Besides popular Marvel superheroes like Spider-Man, Iron Man and Wolverine, the game also features a never-before-seen game engine. Each player starts with a deck of basic cards and then improves that deck throughout the game by recruiting Marvel’s greatest heroes in an effort to take down evil Marvel super-villains like Sabertooth and Dr. Octopus. Legendary has all the cool combos of a trading card game featuring 500+ cards…

Hack into the future and change your reality, one run at a time.

Be sure to check back in later this week as more games will be arriving including another newly released game.