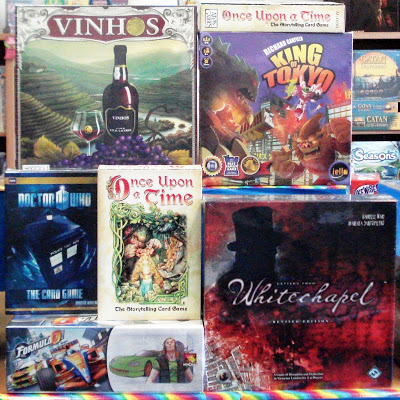 This week’s game arrivals include the following:


The much anticipate game from Fantasy Flight is now available again.  Letters From Whitechapel is a game of deduction and bluffing.

It’s 1888 London and the infamous Jack The Ripper is on the loose. One player is Jack The Ripper who secretly chooses a hideout location. The remaining players are detectives chasing the illusive Jack through the tangled streets and alleys of the Whitechapel district.  Jack’s goal is to claim 5 victims without being caught.  After claiming a victim however, Jack must return to his hideout before going after another victim increasing his chances of being caught. The detectives must work together to catch and arrest Jack in order to stop him from claiming any more victims.

For those who take wine and gaming seriously, Vinhos combines many different game mechanics into a sophisticated strategy game.

You are wine producers in Portugal.  Your goal is to produce and present the best wines at the Wine Tasting Fairs in order to win the most victory points. You will accomplished this by expanding your vineyards throughout the different wine regions, selling, and exporting wine.  Additionally, utilizing enologists and wine experts will help you increase the quality of your wine and enhance your wine’s features, respectively.

Once Upon A Time: The Storytelling Card Game as the box cover depicts, has a fairytale theme.  The artwork on the cards puts you right in a fairytale world.

Come and visit us at 30 NW 2nd Street in Historic Downtown Gresham. We have a full range of family games, strategy games, Euro-style games, war games, card games, dice games and more. Also for the puzzle enthusiasts we carry quality puzzles from Ravensburger, TDC, White Mountain, and Cobble Hill.
We proudly serve Gresham and the greater Portland and Vancouver area.