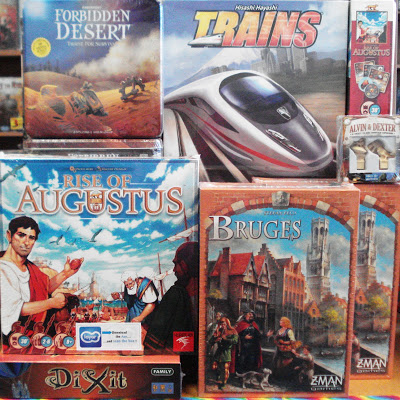 Several newly released games hit our shelves this week.  Here’s what came in:

Just released from Z-Man Games is Burges, another by game designer Stefan Feld.  This Stefan Feld designed game is a little lighter than his normal games.

Belgium, 15th Century.  The first stock market opens its doors.  All of Europe has set its eyes on the wealthy and influential city of Bruges.

In Bruges, players strive to gain influence with the merchants, bureaucrats, nobles, and the many others that rule the city.  With their help, players hope to gain prestige, reputation, and power.  One must be careful as disasters lurk nearby.  Use a little luck, some tactical thinking, and maybe some shady maneuvers on your way to victory.

Another newly released game is Rise of Augustus from Hurrican. This game was nominated for the Spiel des Jahres Award (German Game of the Year) this year.

Rise of Augustus is a 30-minute light strategy game that uses an interesting twist for selecting resources.  Resources are used to mobilize legions, to control provinces, and to influence senators on the way to gaining victory.

Also new in this week and also just released is Trains by Alderac Entertainment Group.

Trains is a deck-building game where you are building the
strongest system of rails throughout Tokyo or Osaka. Your cards not
only allow you to buy other cards to tune your deck, but they will also
allow you to buildtrain stations and rail lines along the game board.

The goal of the game is to have the most powerful railway network. You accomplish this by collecting Victory Points from cards, railways, and stations.

Also hot off the presses, is Forbidden Desert: Thirst for Survival from Gamewright.  This is another game by designer, Matt Leacock who designed  Pandemic and Forbidden Island.

Gear up for a thrilling adventure to recover a legendary flying machine buried deep in the ruins of an ancient desert city.  Players will have to work together as a team and use every available resource in order to survive the scorching heat and relentless sandstorm.  Find the flying machine and escape before you all become permanent artifacts of the Forbidden Desert.