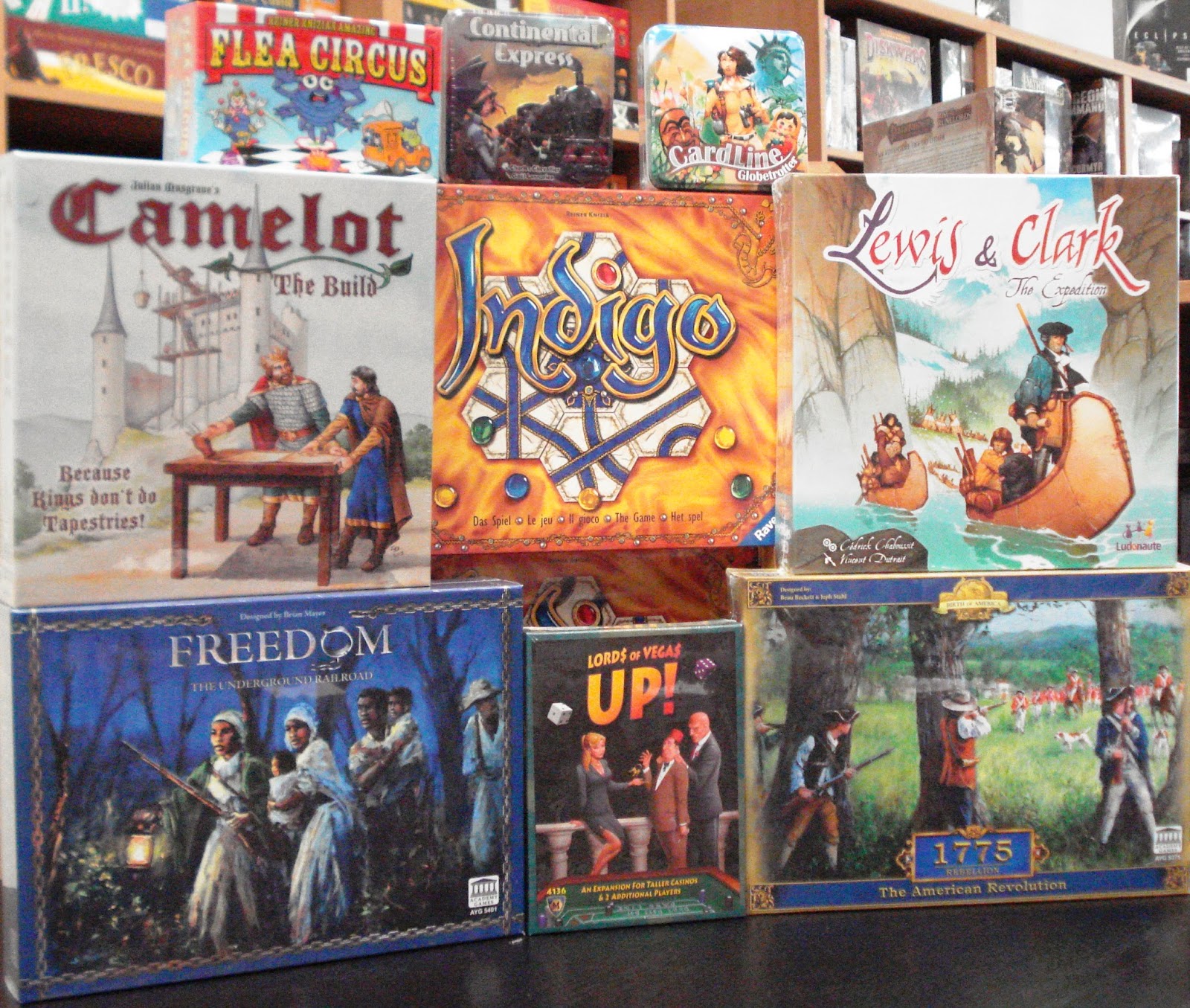 A truckload of new games were in this week’s arrivals.  Here is what’s new in stock:


New in from Asmodee is Lewis & Clark the Expedition.

Let’s go back to 1803 and imagine that President Jefferson did not send one but many expeditions to explore the Wild West. You and the other players will each lead one of these parties. Your aim will be to cross the North American continent and, of course, to reach the Pacific as soon as possible. History will only remember the first to arrive. Lewis & Clark is a race game driven by resource and hand management. What needs to be managed are your resources, your Corps of Discovery, and especially the trappers and Native Americans met during the journey. Good management will result in good progress across the West.

Lewis & Clark features dual use cards. To be activated, one card must be combined with another one, which becomes unavailable for awhile. Thus, players are faced with a constant dilemma: play a card or sacrifice it. During the game, each player acquires character cards that enlarge their hand, building a crew gives more options but will have to be optimized as he will recycle his cards more slowly. This new “handbuilding” mechanism fits strongly with the historical background. Since the aim of the game is to be the first on the Pacific coast, the timing and the opportunistic use of the other players’ positions are crucial.

In from Ravensburger is Indigo, a colorful family board game for ages 8+.  In Indigo players create twisting pathways for gathering gems and moving them along to their own gateways.  Not every gateway may belong to just one player; building occasional alliances with your opponents could be the key to ultimate success.
Created by game designer Reiner Knizia who also created Fits, Ingenious, Carcassonne: The Castle, and Ra to name a few.  Indigo received the Parent’s Choice Gold Award 2012.

In from Academy Games is Freedom: The Underground Railroad, a challenging cooperative game pitting the players against the institution of slavery during the early 1800’s through the Civil War.  Players work together for the Abolitionist cause, raising funds and moving slaves from the Southern States to freedom in Canada.  But every move risks alerting the slave catchers, who roam the board trying to return the runaway slaves back to the plantations.

Freedom: The Underground Railroad is an engaging game about a pivotal time in American history.  Players become familiar with the important historical figures, political agendas, and crucial events that unfolded to change American history and begin to bring freedom to an enslaved people.

Academy Games publishes games about history that are used by teachers in schools and universities, military personnel and historical gamers worldwide.

Also in from Academy Games is1775 Rebellion, a cooperative game from their Birth of America Series.


In 1775 – Rebellion, players control the major factions that participated in the American Revolution. On the British side these are represented by the British Regulars (Redcoats), Loyalist Militia, and German Hessian Mercenaries; the Americans are represented by the Continental Army, Patriot Militia, and French Regulars. In addition, both sides may ally themselves with the Native Americans.

Players for each side strategize together in order to coordinate their campaigns. Each side attempts to control colonies on the map. Players may then place Reinforcements into any City Area(s) within colonies that their side controls. The game ends when a truce is called and the side controlling the most colonies wins the game.

In from Wotan Games is Camelot – The Build.  We had a chance to play this game recently at a game convention we attended.

Games is Camelot – The Build is a fun tile-laying game of positively medieval stratagems and low cunning.  With only 3 short rules its easy to learn.  A players’ hand is made up of 10 tiles place on the table in front of them. 7 of these tiles must be placed face up and 3 are placed face down.  The tiles range in point value from 0 to 5.  Players take turns placing up to 3 tiles within the castle walls.  You score points not only on the tiles you placed but also on any tiles that lay adjacent to the ones you just placed.  Play continues until the castle is completely filled.  There’s one twist at the end of the game.  Your last play scores double negative points.  So, it’s important to not save a high point value tile for your last play.

In from Asmodee is Cardline – Globetrotter.

Which is bigger, Chile or Switzerland? Does Kenya pollute more than France? Who has more people, Colombia or Canada? Find out when you play Cardline Globetrotter.

The goal of Cardline is to be the first to rid your hand of cards. Each card is double-sided that depicts a country.  One side of the card will have information about that country’s size, population, GDP, and CO2 emissions.  At the start of the game players will decide which one of these 4 statistics they’ll compare.

Each player will have a hand of cards showing various nations, and will have to fit them into the growing line-up of countries. As the game goes on, it gets harder to guess where your cards can be played. Choose population, pollution, gross domestic product or land area, and find out where your nations fit.  Be the first to place all your cards and you win.

Another game in from Asmodee is Continental Express.  This game comes in a compact little tin that great to take traveling.

As an employee of the “Continental Express” railroad company, you are in charge of the constant ballet of train cars at your station. You must complete each train in time for it to depart. But, the other “switchmen” want the same train cars as you…and in this yard there are no holds barred! As a railyard manager, players must “switch” the right train cars to the station in order to form their train. The cars will be worth victory points, depending on their number and rarity. The player with the most victory points at the end of the game is declared the winner!

Step right up! Calling all Cats and Dogs! The Flea Circus is about to begin! It’s a wild time under the Big-Top as dogs and cats race from one show to the next. Players use their best circus act cards to attract the most animals. Play your cards right and you can steal the audience away from your neighbor! But watch out for the Animal Catcher — he’ll snatch your animals away! Whoever has the most cats and dogs at their show wins the game!

In from Fantasy Flight is the latest data pack expansion, Double Time for the base game Android Netrunner.  This data pack contains 60 new cards designed to augment Corp and Runner decks – cards 101-120 of the Spin Cycle.