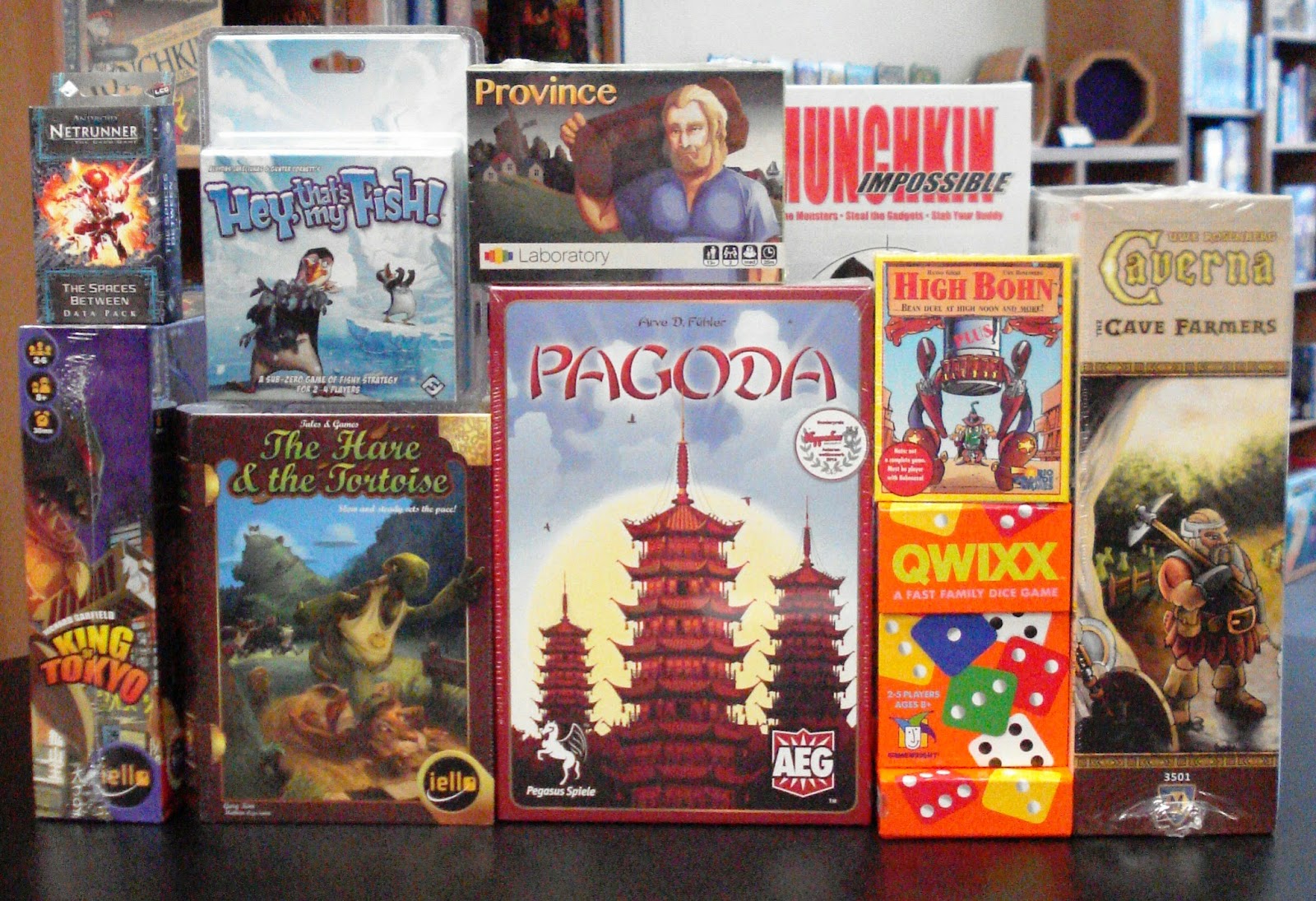 Come in and see what games are now in stock.

Newly released from Laboratory Games is Province, a 2-player micro game.  In this game players will vie for power as they settle a new provincial town. They will need to control growth as they develop the town by building camps, bank, smithies and harbors.

Province is a two player game where you must strategically manage your resources and workers to build, complete goals, and score the most victory points to win! The game features a communal worker pool representing the available workers in your town. Players move their workers to generate resources (Labor and Coin) that are used to build the various Structures, which in turn effect resource generation. But your opponent can also move the workers leaving you without the resources you need!

~ ~~ ~ ~~ ~ ~~ ~
Another new game is Qwixx from Gamewright.  Qwixx is a fast family dice game for 2-4 players.
Players are involved with every roll of the dice.  The object of the game is to cross off as many numbers in the 4 different colored rows as possible on their score sheet. The more numbers in a particular color row the higher the score.
Sound easy?  You must mark off numbers in each row from left-to-right.  You may skip numbers in a particular row, but any numbers skipped over may not be marked off later.  A player who has marked off at least 5 numbers in a particular color row may lock it. This row is now finished and closed off for all the players and no more numbers may be marked off in this color in any of the subsequent rounds. The key to winning is to utilize the dice rolls to maximize points and timing as to when to close rows.

New in from AEG is Pagoda, a 2-player game of tactical construction.

The Emperor of China is coming to visit you!  It is now up to you – the best architects – to honor him by building the most extravagant pagodas…

By playing cards you will be erecting the columns, floors, and roofs of those pagodas.  Fore each of these tasks you will earn points.  Additionally, pagoda tiles will yield special abilities that you can use during the course of the game.  The player with the most points after the completion of the 3rd pagoda will be the winner.

The tortoise accepted the hare’s demand for a rematch, and the news spread throughout the country.  The great race was about to commence, and all the participants were finally ready for this big showdown.  Who, among the hare, the tortoise, the wolf, the lamb, and the fox, will be celebrated as the fastest runner in the woods?

The Hare & The Tortoise has 2 levels of play for little and big racing enthusiasts.

Arriving is the latest data pack for the base game Android Netrunner, The Spaces Between.
This
data pack contains 60 new cards designed to augment Corp and Runner decks.
~ ~~ ~ ~~ ~ ~~ ~

We proudly
serve Gresham and the greater Portland and Vancouver
area.