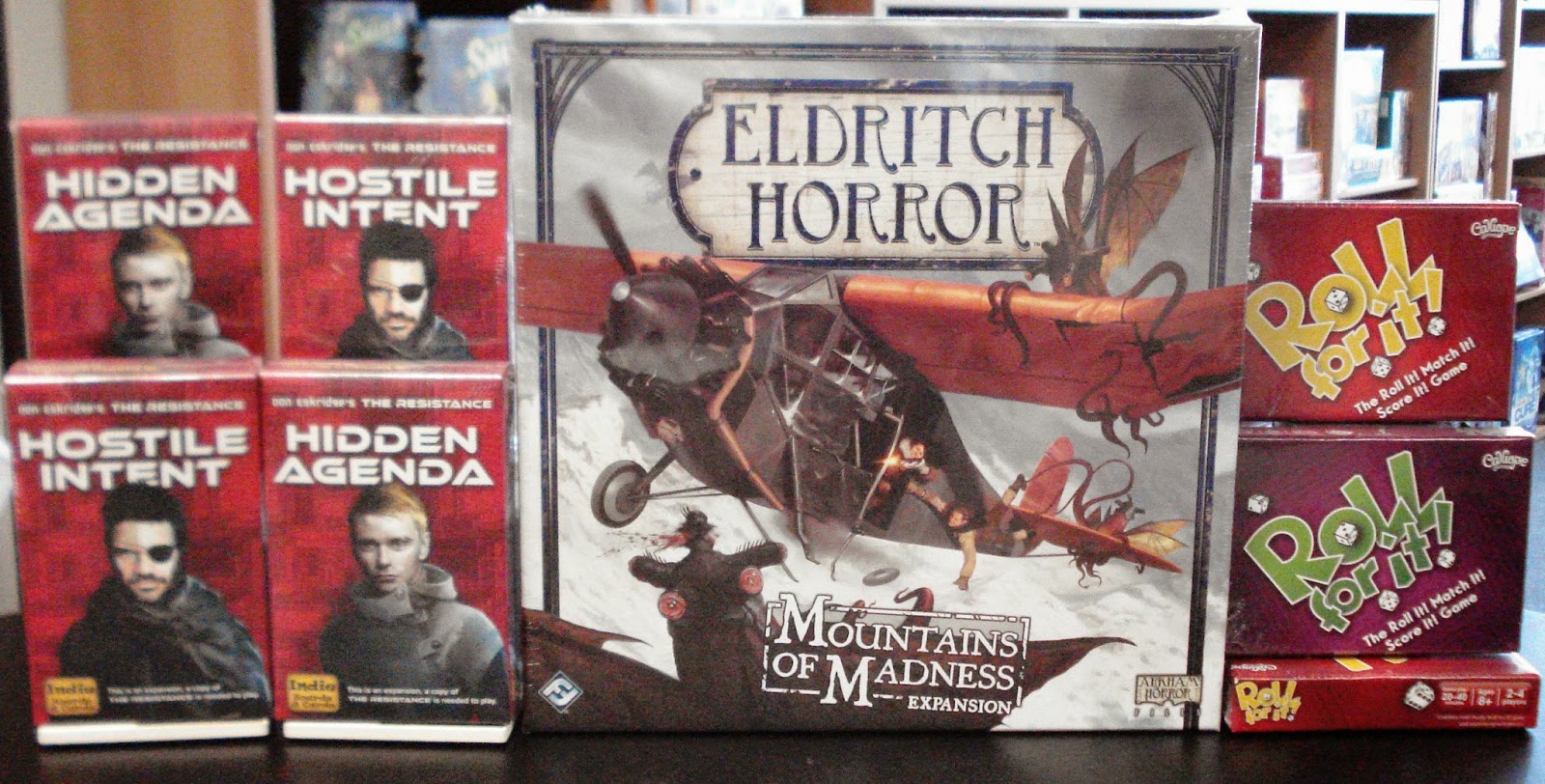 Yes, we’ve been busy trying to fill those empty spaces on the shelves with more games.  And more we have.

Here’s
a look at the games that arrived this week:

Just in time and great as a Christmas stocking stuffer for The Resistance fan are these 2 game expansions.

The Eldritch Horror Mountains of Madness expansion introduces the Antarctica side board; a harsh new locale.  Antarctica is riddled with strange mysteries and hidden dangers. Eight new investigator are prepared to unveil the truth behind the strange happenings in the world, accompanied by new allies including Professor William Dyer.  To aid in their mission, investigators can undertake personal tasks to gain powerful rewards.  They will find a plethora of useful items, magic spells, hideous conditions, and terrifying encounters awaiting them at the Mountains of Madness.

Another great stocking stuffer is Roll for it!, a fun, fast, and easy card & dice game for 2 to 4 players.  Combine the red box and the purple box to take your game up to 8 players and a wider variety of cards.
The object in
Roll
For It is to be the
first to score 40 points.  You do this by competing for the point-value cards
that are face-up in the center of the table.  Each player will have a set of 6
dice of one color.  On their turn players will roll their available dice and
match their dice results to the dice images shown on the cards. A card is
claimed when a player has met all of the dice images. A new card is then flipped
over from the draw pile.

Deciding when
and how to spread your dice is key to claiming cards as your opponents will be
going for these same cards too.

Newly released for Android: Netrunner fans is The Source, the 6th and final data pack in the Lunar Cycle containing cards 101-120.

Follows cyber-explorer Nasir Meidan’s departure from Heinlein for Earth and the relative safety of his apartment. There, he stares at the drive in his hand before booting up his console. Was he able to complete the download he began on the moon? Does his drive truly contain the net’s legendary source protocols? What will he find? After a series of thrilling encounters with Corporate security measures and security officers, all he has to do is pull up the files…