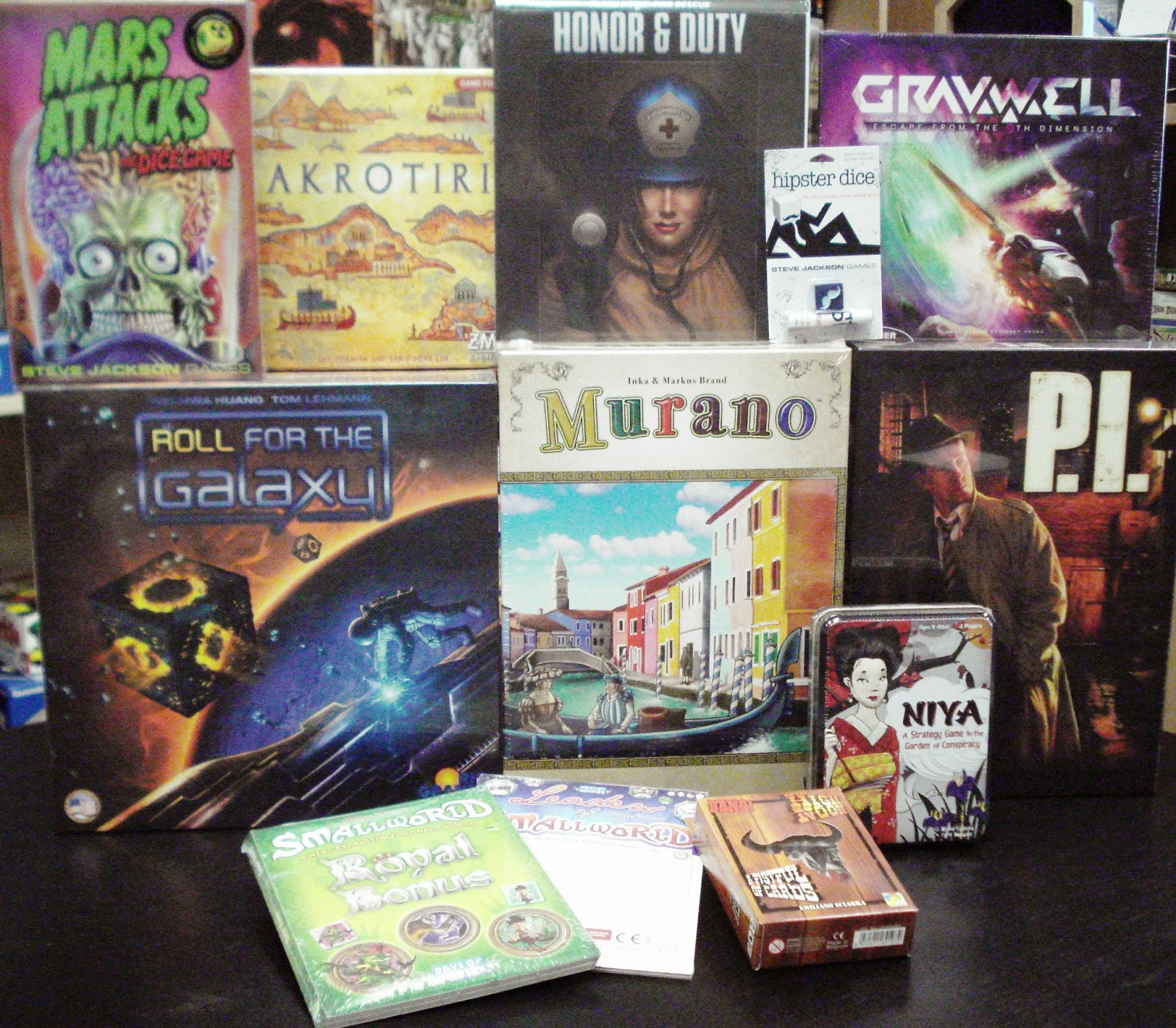 Since the holidays we’ve been busy getting our shelves refilled with games.  Not only are we restocking your favorite games we have also brought in some new games.

Here’s some of the games that have arrived recently:


Murano seeks the most glorious of merchants!

Players are businessmen building up the various islands that comprise Murano, Italy in an attempt to accumulate the most victory points for the game win.  Players do this by placing glass factories, shops, and palace building tiles along with gondoliers throughout the islands.


Murano utilizes an interesting game action selection mechanic.  Surrounding the islands and making up the perimeter of the game board is the action track. There are 8 gondolas scattered along the action track.  On a turn a player may move one of the gondolas along the action track stopping on an unoccupied action space.  At times players may need to push other gondolas forward in order to free up the action space they desire but this comes at a cost.  During the game players will need to acquire character cards
which not only influence their build and gondolier actions but will provide the
majority of their victory point score at the end of the game.

New from Rio Grande Games is Roll For The Galaxy, a dice game of building space empires.  Seven different types of custom dice represent your populace, whom you direct each round to develop new technologies, settle worlds, and ship goods. The player who best manages his workers and builds the most prosperous empire wins!

This dice version of Race For The Galaxy takes players on a new journey through the Galaxy, but with the the feel of the original game.

New from Z-Man Games is Akrotiri, a 2-player game aimed at those who appreciate a deeper strategy game.

Akrotiri places you in the role of an explorer in Classical Greek times, combing the then-uncharted Aegean sea for legendary Minoan temples. You have not only heard the rumors of their locations from other mariners – you have some of the secret maps thought to be myth!  In order to fund your voyages into the unknown and excavate the ancient temples, you will have to first ship resources found on surrounding islands back to the resource-poor island of Thera. Then, using landmarks to guide your way, follow your maps maps, and unearth the forgotten temples before time forgets them, and may the gods forever bless you with favorable winds!

This is a tile placement, hand management, and pick-up and delivery game. Players place land tiles to the central game board in order to make it match the maps they have in their hand. On the various islands surrounding Thera players will gather resources and ship them back to Thera to sell in order to funds voyages in search of temples. Players earn points by excavating the bigger harder to find temples. Both players also have secret goal cards that aren’t revealed until the end of the game.

Back in our mystery games section is P.I. by
game designer Martin Wallace.  This is a game of deduction where each player is
competing to be the best detective in the city.

A full game
is made up of 3 mini games.  In each mini game players must attempt to solve
their case by finding the suspect, the crime they committed, and the location
where they are now hiding.  The twist is that players are attempting to solve
the case held by the player to their right, with the fastest investigators
earning more points than the slower ones.

In from Steve Jackson Games is Mars Attacks The Dice Game, a fast-playing tactical dice game for 3 – 6 players.

Players are Martians targeting earthly cities.  On a turn a player will choose a city to target – roll the 10 dice. Lasers will be place the laser spots within that chosen city. Nukes must be place but can be placed on any city with an available nuke spot.  Brains allow the player the option to reroll them in an attempt to get more lasers to complete the chosen city and hoping to avoid getting more nukes than there are places to put them.  A player may stop at any time during their turn and mark their laser total hoping that an opponent doesn’t claim that city before their next turn.

Hipster Dice is a game you can play over mocha lattes at your favorite coffee bar, or at the organic grocery, or while you’re waiting in line at the secondhand clothing store. There’s one die. Each face on the die corresponds to a category: a Treble Clef, a Coffee mug, the letter “a”, a Moustache, a Movie Camera, and a Cheese Wedge.


To learn more you can watch this video by Blue Orange Games.

Two new mini expansions for the base game Small World have arrived, Royal Bonus and Leaders of Small World.

The Royal Bonus mini expansion contains these 3 new power badges (Aquatic, Behemoth, and Fireball) and these 3 new races:
The tokens in the Leaders of Small World mini expansion are neither a race nor a special power.  Instead, they are a new option: whenever you pick a new race and special power badge combo, you may opt to also immediately attach the services of a Leader to your race.  As long as your race is active your Leader will act like an additional race toke with a few exceptions.  Beware, your Leader may be captured and may be ransomed back to you.  If however, your Leader is in an opponent’s victory stash at the end of the game it is worth 2 victory points for your opponent.

Honor & Duty is the latest expansion, to the cooperative game Flash Point. This game expansion consists of a double-sided game board that features an airplane fire on one side and a subway station disaster on the opposite side. Also included are several new game markers and detailed instructions for playing with these new materials.

This expansion pack combines High Noon with A Fistful of Cards for added fun to your base game of Bang!

In the Wild West, shootouts between the Outlaws and the Sheriff are getting even tougher. Now, players must be ready to welcome the Judge, keep their cool during the Gold Rush, and be really careful when walking through a Ghost Town. Unpredictable event cards change every turn of the game.