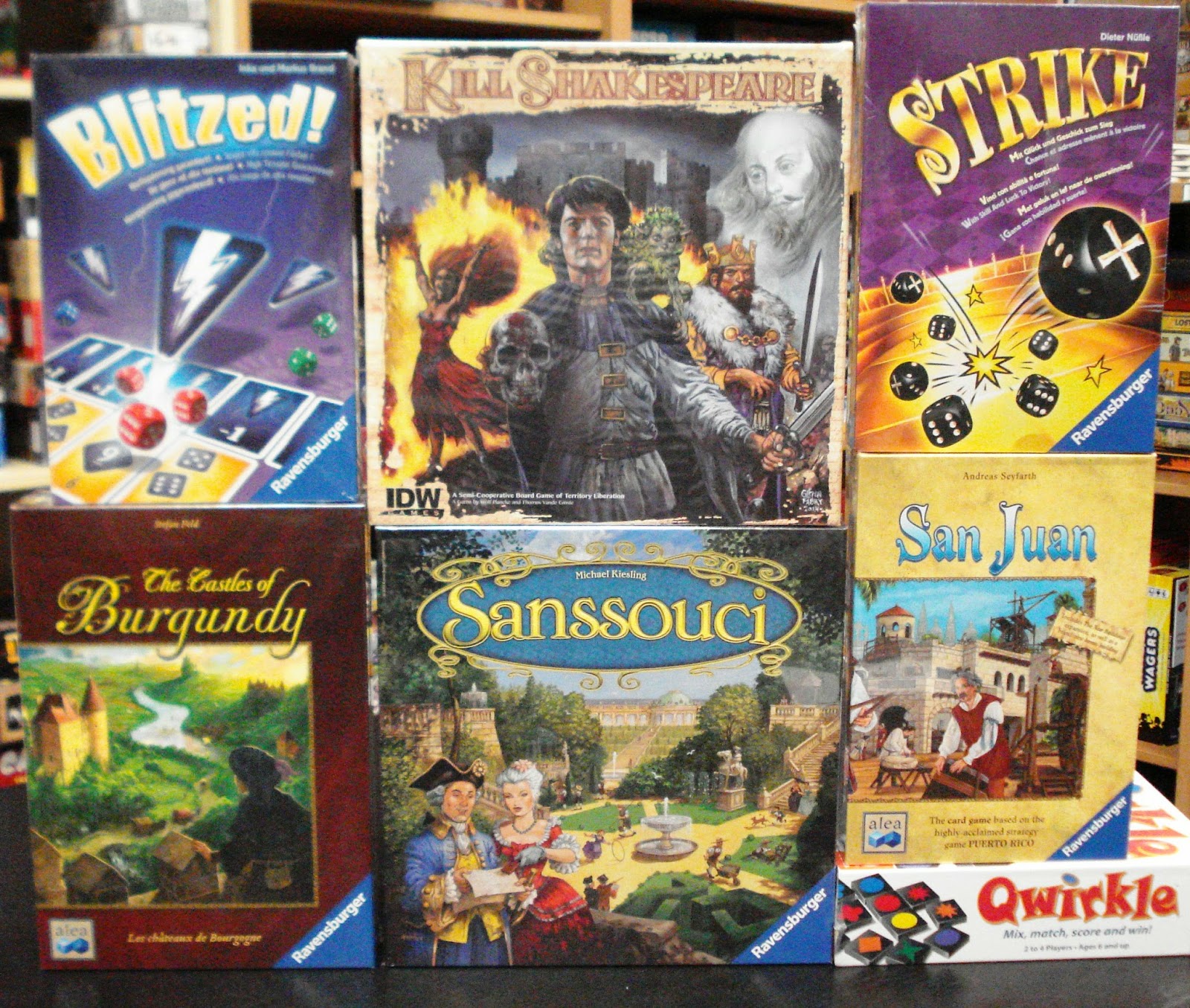 The new games
still keep rolling in and this week is no exception.  Here’s a look at what came
in:

Who will create the most majestic garden in this newly released game, Sanssouci?  It’s 1745 during the reign of Frederick the Great, king of Prussia.  The king has commission you to construct the most impressive garden for his new Sanssouci Palace.

Sanssouci is a tile-placement board game
where players compete to build their palace garden player board such that their noblemen can move down a series of garden paths.  The
farther down into the gardens the noblemen go the more victory points they will
earn. A nobleman may work his way through a maze of paths but must end on a
tile in the column in which he started.  Additionally, players will each
have 2 secret mission cards that will score bonus points at the end of the game.

This is an easy to learn, family friendly light strategy game that plays in 30 – 45 minutes.
Watch this game overview video by Ravensburger at the Essen Game Convention

We have an open demo copy of Sanssouci that you can come in and try.

New in from IDW is Kill Shakespeare, a semi-cooperative board game based upon the award-winning comic series of the same name.
IDW game description:

In Kill Shakespeare, you and your friends will join together to free the kingdom from the clutches of Richard III and his forces.  You will compete to liberate cities, remove his influence from the land, and complete quests to wrest control from the vile King Richard.

You will use your own influence to grow your army and steal troop – movement letters and city plans in order to liberate the cities that have been occupied by Richard and Lady Macbeth’s forces.  You must be careful, however, because not all of your companions can be trusted.  You must beware the vile Iago, who will steal you own plans and report your troop movements to your sworn enemies. 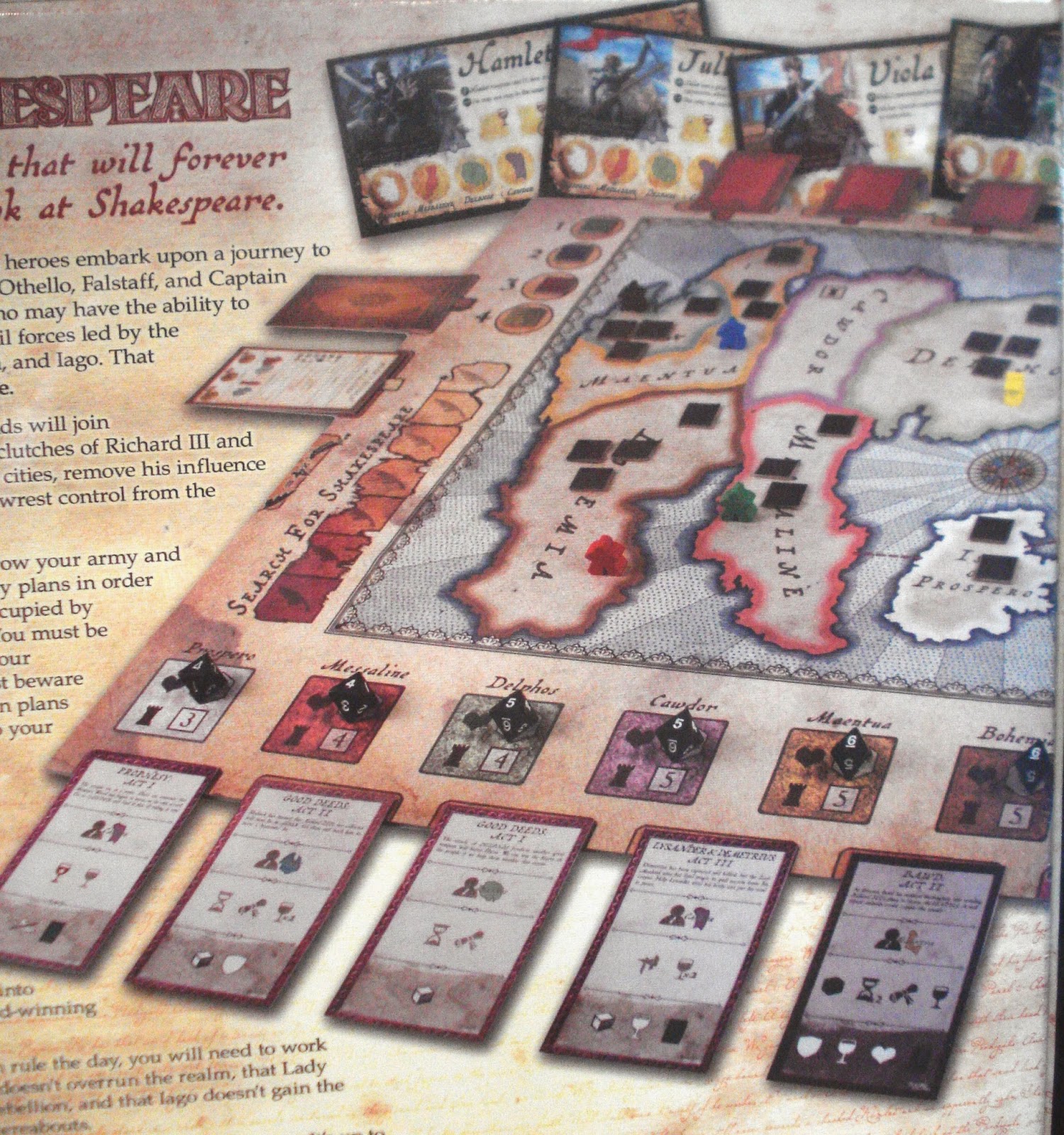 Throughout the game, you will be given quests by the likes of Puck, Shakespeare, and other favorite characters from the pages of William Shakespeare’s great plays.

While only one of the heroes can rule the day, you will need to work together to ensure that Richard doesn’t overrun the realm, that Lady Macbeth doesn’t ensnare your rebellion, and that Iago doesn’t gain the knowledge of Shakespeare’s whereabouts.

Also in are these two Ravensburger family games, Blitzed! and Strike.

Blitzed! is a simultaneous-play dice game.

In each round plus/minus cards equal to the number of players will be placed in the center of the play area. Below each of these cards will be a task card that has either a sum or an image of 3 dice. Players will vie to claim one of these task cards. To do so, players will all start rolling their dice choosing which to set aside as they work towards matching a task card. Once a task card combination has been met by a player they place their claim card on the task card. No other player may now claim this task card. Play continues until all but one player has claimed a task card. Each player will begin the game with 8 lightning bolt tokens that represent victory points. Players will gain or lose these victory point tokens based on the task cards they claim or fail to claim.  The player with the most lightning bolts at the end of the game wins.

Strike is a press-your-luck dice game. 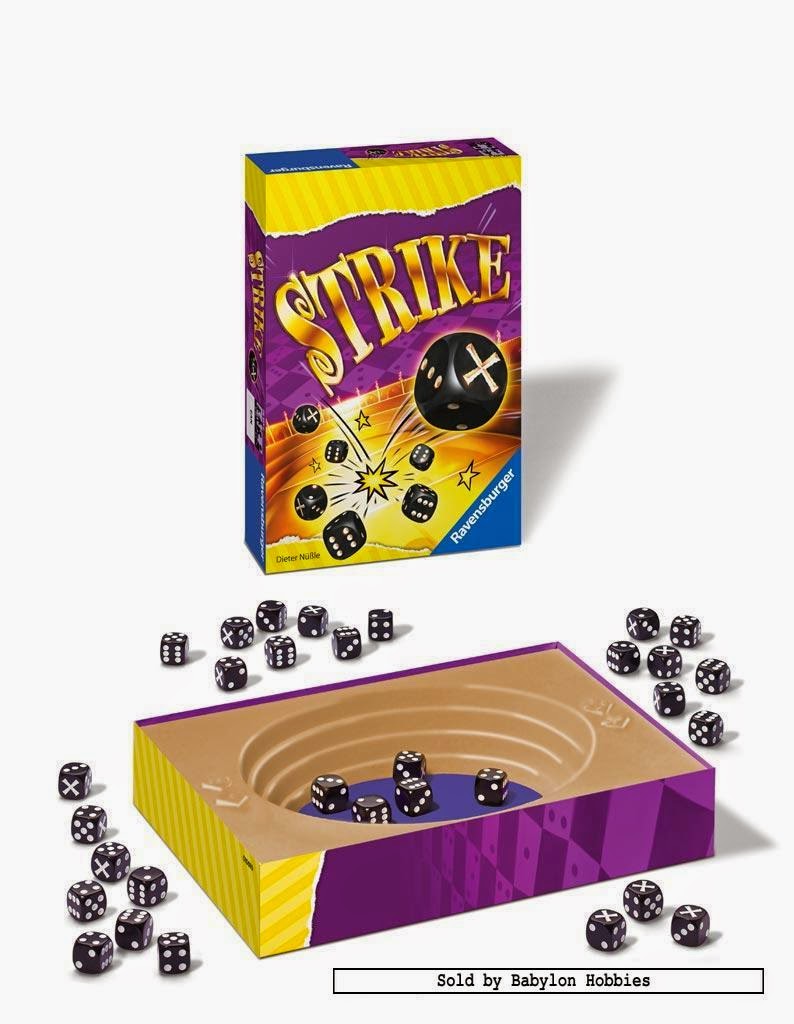 You will roll you dice into the arena and re-roll dice already there to retrieve any number matches made.  Throw in another die or end your turn. X’s rolled are out of the game as are ones sent flying.  Players without dice left are eliminated. The last one holding dice wins.

Back in stock after being out of print is San Juan 2nd Edition, a card game version of the popular strategy game Puerto Rico.  This 2nd edition includes all of the cards from the original game as well as The New Buildings expansion, and a brand-new bonus building, the Hut.

San Juan is played over several rounds. In each round, each player chooses one of 5 different roles and all players take the corresponding action in clockwise order. So, for example, goods are produced by the producer and can then be sold to the trading house by the trader. With the money earned from such sales, players can build buildings in San Juan with the builder. The player who makes the best role choices and makes the best use of his privileges and the role choices of his opponents will achieve the greatest success and will win the game. At the end of the game, the winner is the player who has the most victory points.

Aimed at kids 3 and older is this cooperative game with colorful wooden snails .  The game has 6 colorful garden snails ready to race down the game board. Which snail will come in 1st and which will finish last?  Who can guess the outcome?To find out, roll the 2 colored dice and let the race begin.

The judge, the policeman, the burglar and the banker. They all take part, but they don’t always carry out their own actual occupation. Sometimes, the judge performs a burglary, the policeman decides a sentence, and the burglar is seen behind a bank counter!
In the card game of Wanted!, all players perform speed-based tasks when certain cards are laid on the table.  The slowest player is penalized by taking the discard pile.  Players will race to be the 1st to play all of their cards.  Players will need a fast eye and quick reflexes to win this action packed game.