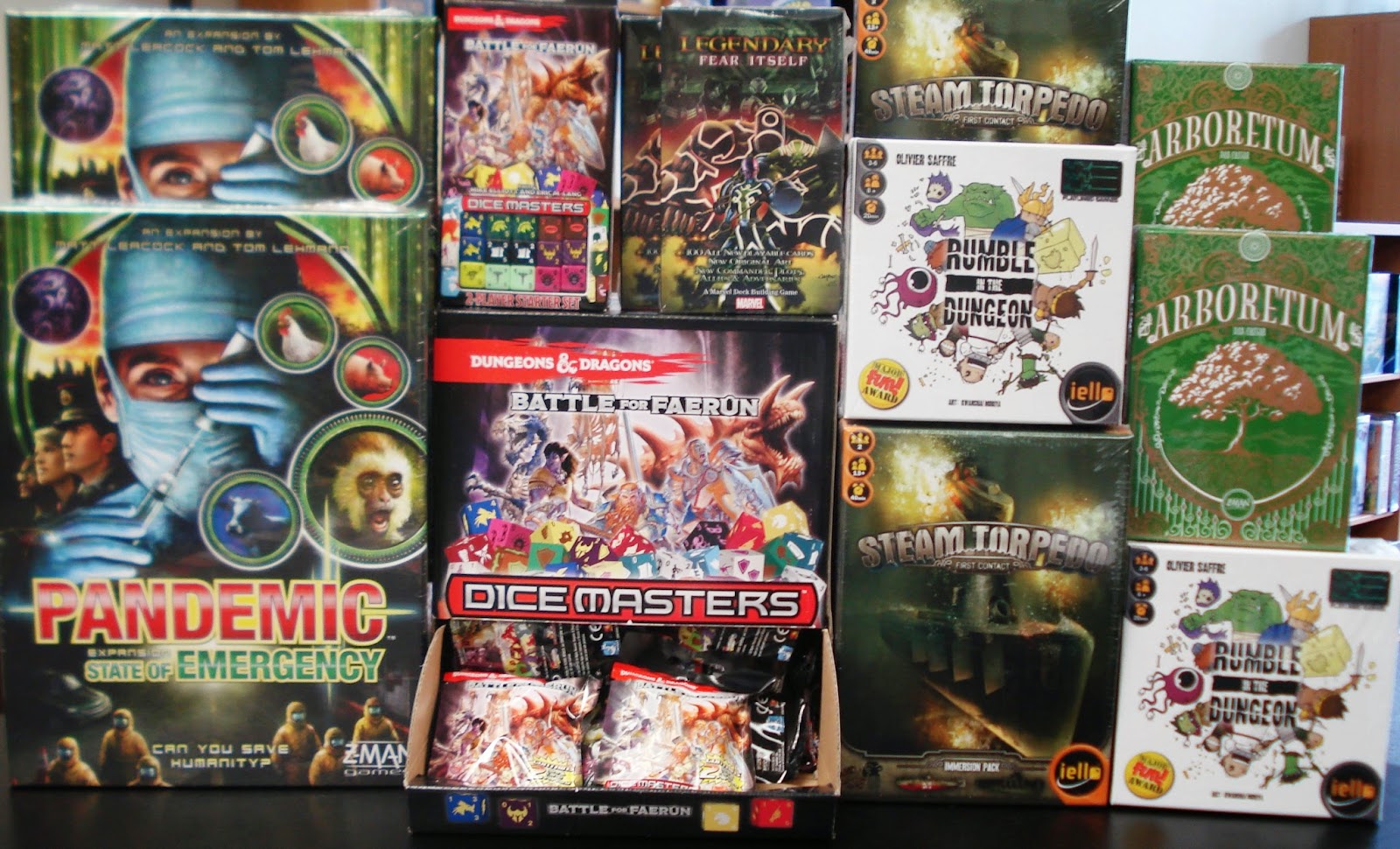 The Dice Masters series is a 2-player dice-building game. Each player takes the role of masterminds directing the actions of a team of powerful supers (represented by dice) to battle each other. Each turn, you’ll roll your dice to see what resources you have available, buy dice, send your team members into the field, and then strike at the enemy mastermind.

New in Z-Man Games is Pandemic: State of Emergency, the 3rd expansion to the popular cooperative game, Pandemic.

Pandemic  is a cooperative game where players are members of an international disease control team, working together to research cures and prevent additional outbreaks.

The State of Emergency expansion presents players with 3 new challenges:

This expansion is not for the faint of heart.

New in is Arboretum, a 2 to 4 player card game. Players will develop a garden of different types of trees. Making the most beautiful arboretum will not be an easy task, and some planning will be required. Which species will you choose? Lilac, willow, or maybe maple?


The goal in Arboretum is to create a pathway of tree of increasing value, where
the first and last cards are of the same color.  This is a player’s arboretum and is created on the table in front of each player.  Players will also need to collect in their hand as many of the trees that match their tree path.  At the end of the game the dealer names each tree, one after the other. For each type of tree, the players reveal each card in their hand
matching that tree. The player who has the highest
sum in a given tree gains the right to score points for
any paths matching that tree in their arboretum.  Along a path, each card must be greater in value than
the one preceding it. Therefore, the smallest possible
path is made up of 2 cards of the same tree, and the
longest is made up of 8 cards (this path must start with
a 1 and end with an 8).

Before battle begins both players will plan their strategy through the construction of their submarine.  They will choose a submarine class, select a crew, and outfit the sub with various technology compartments such as firepower, fast engines, etc.  Next the tactical battle begins.  Each player will control the actions of their crew to outmaneuver and attack their opponent’s submarine.  Game is won when the opposing submarine’s control room has been destroyed or all of it’s crew taken out.

Watch this video for a game overview of Steam Torpedo.

New in from Upper Deck Entertainment is Marvel Legendary: Fear Itself, the first expansion to the base game Marvel Legendary Villains.
In the core game, Legendary Villains you play as Marvel villains combating against the best heroes in the Marvel universe. You will build your card deck with Magneto and the rest of the Brotherhood or try a strategy with Sinister Six.


With the Fear Itself expansion fear is upon you.  You can recruit the “Worthy” and battle against the “Mighty” for some new and amazing game play.  Kuurth, Nul, Skirn, Nerkkod, Greithoth, and Skadi are not alone as they will have to battle Uru-Enchanted Iron Man, the newest Commander.

Another Iello game we picked up at the game convention is Rumble In The Dungeon, a super light and quick game. 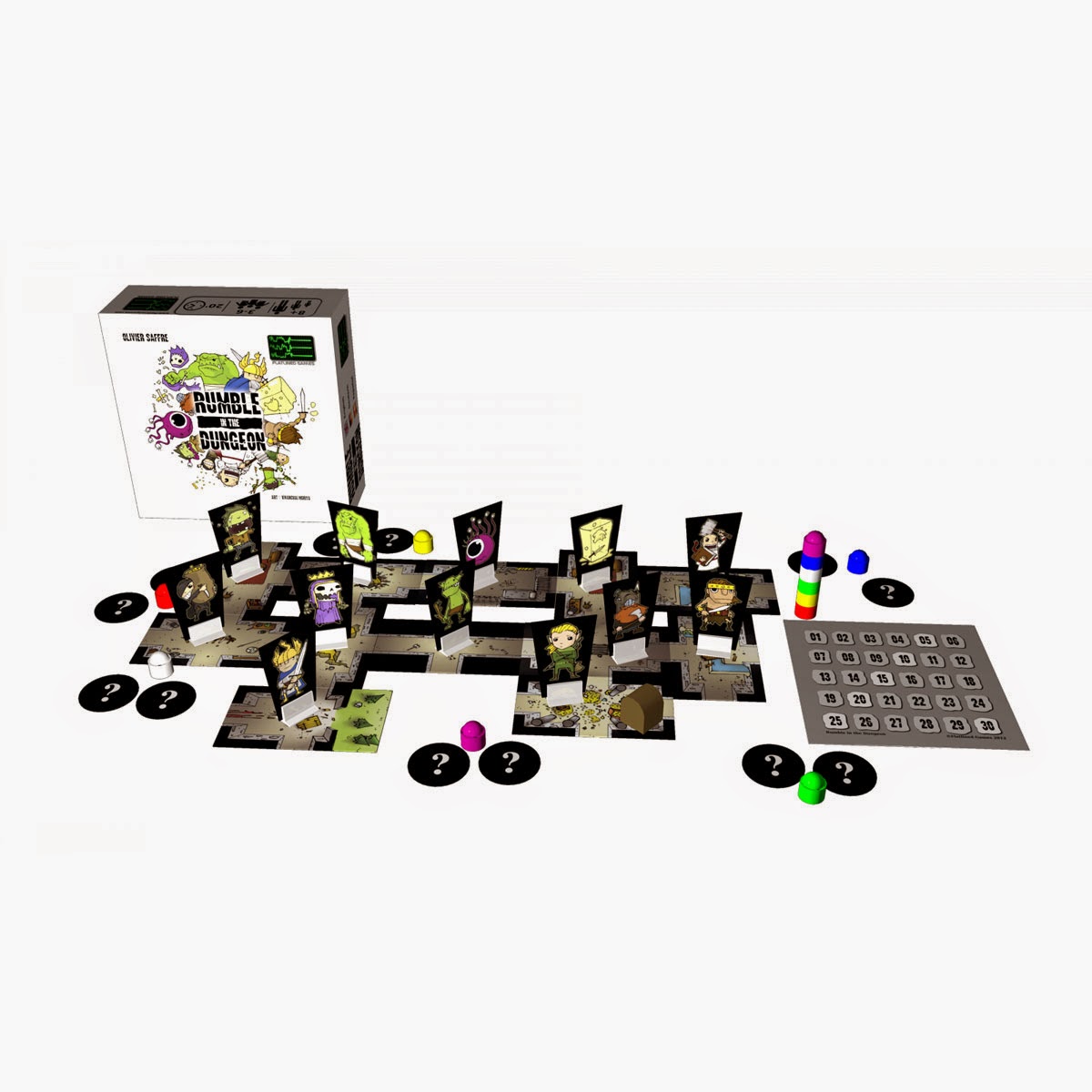 Living together in a small dungeon is not easy. When the pressure is too high, it’s time for a big rumble in the dungeon!

On your turn, either move any character alone in a room to an adjacent room, or eliminate any character from a room with several characters in it. When there’s only one character left in the game, reveal your secret identity and score points for being in the game the longest.

Try to guess who is who without revealing too much about your secret characters, and keep them alive in the house as long as possible!
That simple. So evil. Just fun.

Watch this video by Dice Tower for a game overview.