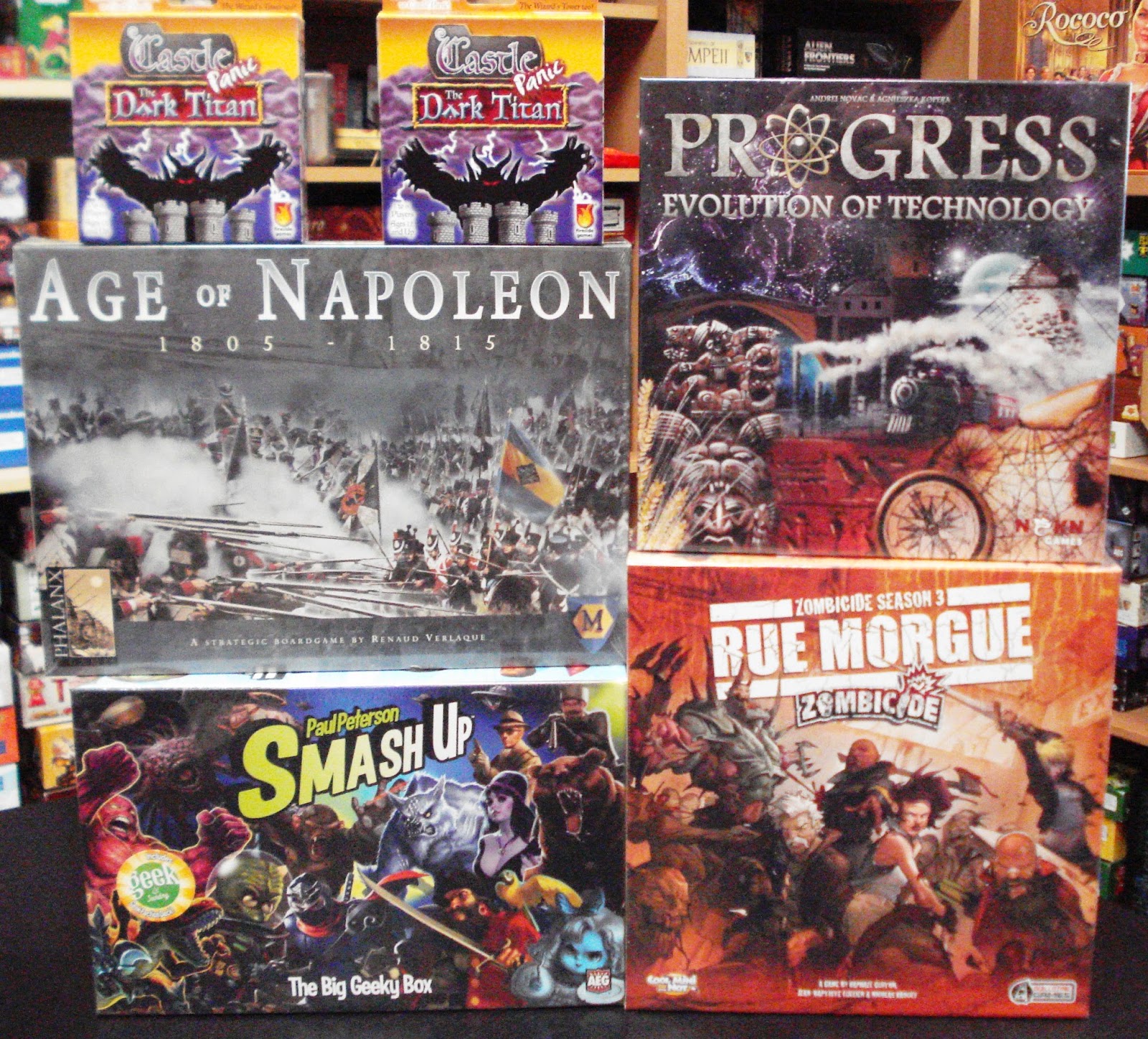 More new games have arrived!  Here is a peek at what’s come in this week:

Arriving in this week is Cool Mini or Not’s Zombicide Season 3: Rue Morgue, a cooperative game for 1 to 12 players.

Take the lead of a survivor team and harness its members’ unique skills to achieve victory against hordes of zombies! The infected creatures are controlled by simple rules and a deck of cards. Play 14 missions on 14 different maps made from the included modular map tiles, or create your own…

Choose your team members among 12 survivors & lead them with Team Actions…. Supplies are scarce enough to pit each team against team in the brutal Competitive mode, but weapons like bows, chainsaws, Molotov cocktails, shotguns, & urban maces can be found anywhere. The only way out is Zombicide!


Zombicide Season 3: Rue Morgue includes 80 miniatures, 12 experience trackers, 9 double-sided game tiles, 155 mini-cards, and more. While it is a standalone game it can also be combined with the other Zombicide base games and expansions.

Another new game is this week is Progress: Evolution of Technology, a card driven civilization game about about researching technologies and building a civilization.

In Progress: Evolution of Technology, players are immersed in the universe of science, engineering and culture, recreating humanity’s technological path until the 1st Industrial Revolution.  They will guide their nation’s research efforts through a maze of technologies from the earliest signs of human development, moving progressively through the Antiquity, the Middle Ages and the Renaissance until the 1st sparks of the Industrial Revolution.

The goal of the game is to accumulate the most victory points by researching technologies.  With each technology, you will gain benefits which will enhance your game board. You will advance your position on one or more of the Power Tracks and gain points which will be added towards your final point total at the end of the game.

~ ~ ~ ~ ~ ~ ~ ~ ~
Castle Panic’s newest game expansion, The Dark Titan arrived in this week as well.
Castle Panic is a family fun, lite
strategy cooperative game.  Players must all work together to
defend the castle from monsters that are attacking.   Players trade cards, hit
and slay monsters, dodge boulders and even
plague; do whatever it takes to keep the castle towers intact.

The Dark Titan expansion brings more panic. Agranok has returned and has brought a new army of monsters to lay siege to the Castle.  Agranok is an 8-point monster and has 5 different difficulty levels that you can choose from. Included in his new army is a Boom Troll & the Dark Sorceress.  The Boom Troll carries explosives and can blow up parts of your Castle unless you stop him. The Dark Sorceress cripples your hand size while in play.

Breathe deep, you will gain additional assistance in your fight to defend.  The Cavalier, when he gets on the board, can deal up to 2 points of damage to any monsters in the same space.  Also Support Tokens can damage monsters or give you special advantages if they make it all the way to the Castle.

Adding to our war game section is Age of Napoleon 1805- 1815, a 2-player strategic board game.
Age of Napoleon 1805- 1815 is based on the rise and fall of one of the greatest military commanders in history, Napoleon I.  One player commands the forces of France and its allies and tries to achieve domination of the European continent.  The other player leads a coalition of nations aiming to force Napoleon’s abdication once and for all.

The game not only represents the military units with playing pieces but also integrates famous events, important personalities and random factors by using playing cards.  There ar 3 different scenarios, starting in 1805, 1809, and 1813.
~ ~ ~ ~ ~ ~ ~ ~ ~