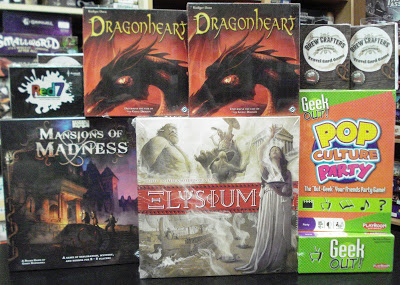 Here’s a glance at these board games:

One of 3 games nominated for the prestigious 2015 Kennerspiel des Jahres (Strategy Game of the Year Award) is the newly released Elysium from Space Cowboys/Asmodee. Previous board games from Space Cowboys includes top seller Splendor and Black Fleet.

In Elysium players will take on the role of an aspiring
demigod striving to win approval and create their legend with the Gods of Mount
Olympus.  To do this, players will build
card combinations to gain access to gold, heroes, and mythical powers over the
course of 5 Epochs.  Acquired cards will
first reside in a player’s Domain where the powers can be utilized.  However, points are scored for cards that
reside in a player’s Elysium.  The tension
mounts as players must decide when to move cards from their Domain, thereby giving
up the powers, and into their Elysium in order to accumulate victory
points.  Points are scored by creating sets
of cards in your Elysium.  Each card
belongs to one of 8 families (Apollo, Ares, Athena, Hades, Hephaestus, Hermes,
Poseidon, and Zeus) of which only 5 families will be in play in a given
game.  Each family of cards will also
have a level from 1 to 3.  Points are
scored for completing sets of a family and/or sets of equal levels.  Bonuses are earned for being the 1st to complete a particular set combination.

New in from Dice Hate Me Games is Brew Crafters: The Travel Card Game, a micro brewed card game version of the board game Brew Crafters.

Brew Crafters: The Travel Card Game is a 30-minute card game for 2-4 players – beer not included.  Players compete to be named the Best Brew Crafter in town.  They will build their breweries by installing equipment and hiring workers in the right combinations needed for the types of beer they are crafting for reputation points.  The player who earns the most reputation points wins and is deemed the city’s Best Brewer.

~ ~~ ~ ~~ ~ ~~ ~
Adding to our party game sections is Geek Out! Pop Culture Party, the game of mind-altering fun that finds out once and for all which player is the most knowledgeable about your favorite pop culture subjects.

Simple to play, draw a card, roll the die to determine the topic (ex. Blue: 4 TV Detectives). Then let the bidding begin – – I can list 5, I can name 7, well I can do 9!  Will you let your opponents steal your points by outbidding you or face the challenge yourself?  How far will yo go to prove your worth and out-geek your friends?

You don’t have to be a op culture geek to win this exciting social interaction and bluffing party game.

Function breeds fashion in Chrome City. The Data Pack’s sixty new cards (three copies each of twenty individual cards) introduce players to the northern SanSan borough of Chrome City. Here, among the sketchy chop shops planted in the shadow of Haas-Bioroid’s genetics division, a growing community of chromeheads have begun to transform cybernetics into fashion statements.

If the surgery’s good, the latest cybernetics don’t just make you trendy; they also make you smarter, stronger, and more resilient. But a bad chopper’s just as likely to cause you irreparable brain damage as outfit you for the runways. Accordingly, Chrome City and its cybernetic hardware introduce a volatile mixture of risks and rewards, many of which are centered around protecting or damaging the Runner’s brain.