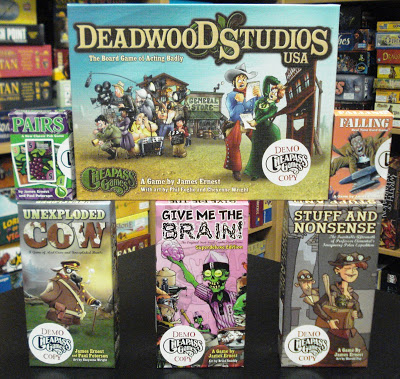 Adding to our open and available demo games to play are the following humorous games from Cheapass Games.


Here is your chance to practice really corny lines from a bad western movie.  Roles are plentiful across the board.  Even minor roles will pay enough to get you through rehearsals to a potential starring role.  Move from set to set and role to role.  Then roll to finish the role to be the best actor in a bad movie.

So who said it was easy to work at a fast food restaurant with a bunch of zombies?

The game starts with a round of bidding to see who gets the one and only brain.  The object is to complete all the tasks in your hand of cards.  Unfortunately, many tasks actually require you to have the brain.  Rolling a successful die roll keeps the brain, unsuccessful roll drops the brain on the floor leading to another bidding war for the brain.  Be the 1st to empty your hand by completing all of your tasks and you will be the brainiest zombie.

~ ~~ ~ ~~ ~ ~~ ~
Players wander the streets of London to gather artifacts so they can spin exotic tales at the Adventurer’s Club.  Clearly honest is not the best policy.  Moving quickly to grab the right artifacts while avoiding Professor Elemental is the best policy in this set collection card game.
So which of your friends can concoct the most outrageous set of stories without leaving town?  Find out in Stuff And Nonsense.

For the serious student of history, using mad cows from England to tramp around in fields in France to low up bombs left over from WWI and WWII makes perfect sense.  There  are 12 cities that need to be cleared of bombs.  If you can blow up one of your cows on your turn you will gain the gratitude of that city’s citizens and a nice bonus.  That may not be as easy as it sounds.  You will need some adventurous cows and a little luck to earn the most money and victory.

This is called a pub game.  I think that means whoever loses may be on the hook for the next round of drinks.  There are no winners.  Just one loser.  The loser is the person to score a set number of points, 16 in a 4 player game.  Each player gets one card face up. Next, the player with the lowest number gets to either take points equal to any one of the face up cards or draw another card.  If he/she opt for the points the round is over and a new round is dealt. If he/she opts to take a card then if the new card creates a pair the player gets the points from the paired card and and the round is over.  If the new card does not create a pair then play options move to the next player.  The deck is stocked with 1 one, 2 two’s, 3 three’s, etc. on up to 10 tens.  Press your luck and make someone else buy the next round.

This is a fast paced real time card game where the object is to be the last player to hit the ground. The deck consists of Hit, Split, Skip, Extra, Move, Stop, and Ground cards. One player will be the dealer and does not do the falling but deals out the deck of cards to the other players one card at a time and always face up.  The dealt card will dictate whether a player will receive more cards before the dealer moves on to the next player.  Players also have the ability to alter the deal in their attempts to avoid being the last player to hit the Ground.  All falling players will eventually hit the Ground, the goal is to not be the last one to hit the Ground.

These games are available in our Demo Games Library for you come in and try.