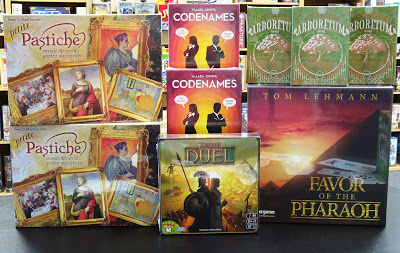 Here is a look at this week’s game arrivals:

7 Wonders Duel is a 2-player stand-alone game.  It uses some of the same mechanics as the popular 7 Wonders game. 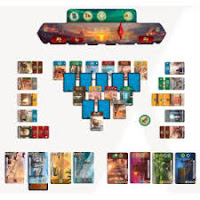 New Game Arrival!
Codenames is a team word game.  Two teams each with a spymaster compete to be the first to identify all of their teams spy cards.  The spymasters’ role is to give a word and a number clue to his/her team members.  The team member’s role is to use the spymaster’s clue to identify the correct words from the card tableau that correspond to their spy team identity.

In Favor Of The Pharaoh, players roll dice to advance in Egyptian society, each turn gaining a new contact and more influence.  These contacts give players more dice to roll or special powers to adjust those dice.  The game culminates in a tense final roll-off as players vie for the Pharaoh’s favor.