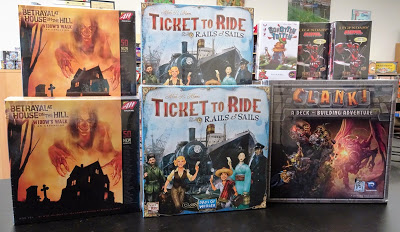 New Game Arrival!
We’re excited that Ticket To Ride: Rails & Sails, the newest in the Ticket To Ride series has arrived.  This stand-alone game comes with a double-sided board.
It’s time for a new railroad adventure – play The World on one side and The Great Lakes on the flip side.  Players collect cards of various types (trains and ships) that allow them to claim rail or sea routes. There are 2 types of travel decks: Colored Trains and Colored Ships. There are wild cards that can be used as either a ship or a train. Some of the ship cards count as 2 ships. An interesting game mechanic is that players will have to pare down their supply of trains and ships after choosing their starting destination cards. New Game Arrival!
Clank! is a deck-building, dungeon crawling, press your luck adventure played out on a game board. The game comes with a double-sided board.

In Clank!  players are sneaking their way through a dungeon stealing artifacts.  The deeper you go, the more valuable loot you’ll find.  Expand your deck and watch your abilities grow.  Some of the cards, while providing abilities can also include Clank! features where you must put some of your life cubes at risk to the wrath of the dragon.  To enjoy your plunder, you must escape the depths alive.

Watch this video to learn more about Clank!

Back in print is Schotten Totten, a classic Reiner Knizia game.


This is a 2-player card game where you each represent a Scottish clan defending your turf.  Nine stone tiles separates you from your opponent.  The objective is to be the first to claim any 5 of the 9 tiles or to claim 3 adjacent tiles. Through out the game you will play numbered clan cards behind the tiles on your side of the border in a poker manner.  When a tile has 3 cards played from each side, the player who played the strongest hand wins the tile (i.e. 3-of-a-kind beats a run of different colors). 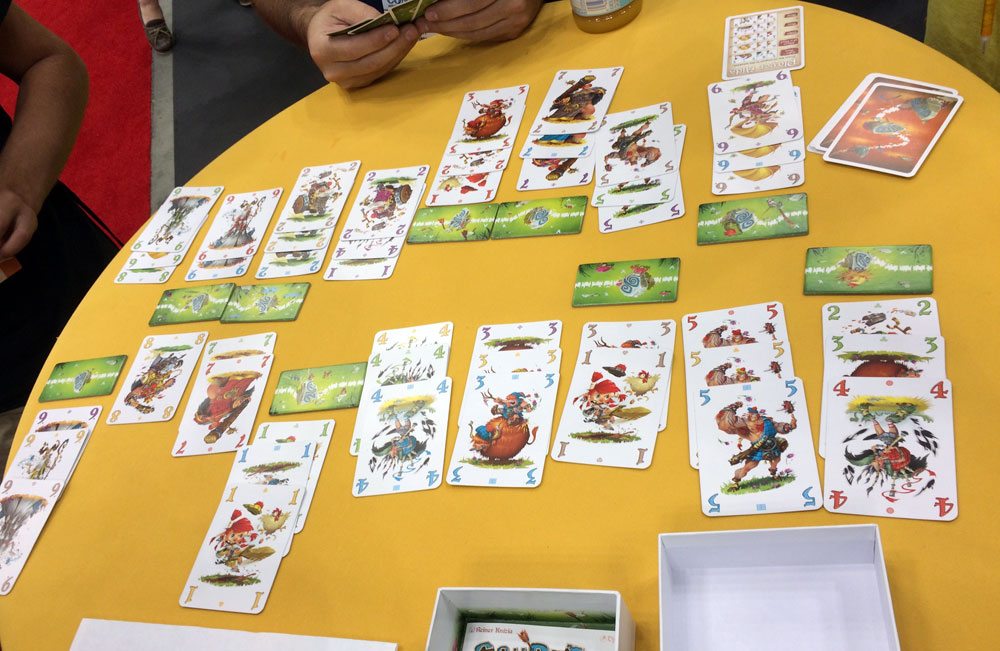 New Game Expansion!
The much anticipated expansion to the popular game, Betrayal At House On The Hill has arrived!  Take a deep breath, as you enter into a creepy mansion to find out if it is truly haunted. Little do you know what evils you and your fellow adventurers will encounter.  Nor, do you know that as you brave your way through the mansion one among you, will turn on you and try to destroy the rest of you.

In A Widow’s Walk, the first expansion, a new world of horror grows.  You have 20 new rooms that include a previously unexplored floor, new monsters, items, omens, events, and 50 new haunts.

“Enter if you dare.  Leave if you’re lucky!”

Additionally,  Legendary Deadpool can be played with Legendary Villains base game.