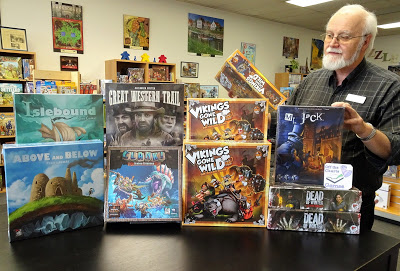 More of your favorite games arrived this week.

In Vikings Gone Wild, each player uses gold and beer to build their city and their army. Each player will have a set of secret individual missions to accomplish for points along with the face-up general end-of-game goals. Victory points can also be gained from successful attacks on opponents buildings as well as attacking one of the undead on the game board. Defenders can also gain victory points for successful defense.

New Game Arrival!
Flip City Wilderness is the sequel to Flip City, a press-your-luck micro deck-building card game. Both games can be as a standalone or combined for added variety.


Unlike traditional deck-building games, with Flip City and Flip City Wilderness you do not deal yourself a hand of cards to play. Instead, on your turn you will play the top card of your draw deck and then choose to play the next revealed card continuing in this  manner until you decide to stop or you bust. You want to play as many cards as you can without accumulating too many frown face icons.  Too many frown faces immediately ends your turn.  When you choose to stop, you may then purchase a new card with any money you earned from played cards or pay to upgrade a card by flipping it over.
~ ~~ ~ ~~ ~ ~~ ~

America in the 19th century. In Great Western Trail, you are a rancher and repeatedly herd your cattle from Texas to Kansas City, from where you send them off by train. You must keep your herd in good shape and use the buildings along the trail wisely. You can also hire capable staff such as cowboys, craftsmen, and engineers. To win you manage your herd cleverly and navigate the opportunities and pitfalls of this great western trail.
Great Western Trail is provides many tactical options.

Back In Stock!
Clank! Sunken Treasures is the first expansion to the deck-building game, Clank!

The deck-building adventure ofClank! continues – and this time, get ready to get wet!  Swim through flooded chambers in your search for great treasure. Recruit new companions for your deck. Fight dangerous new monsters on you way to thieving glory.
A new challenge awaits!
~ ~~ ~ ~~ ~ ~~ ~