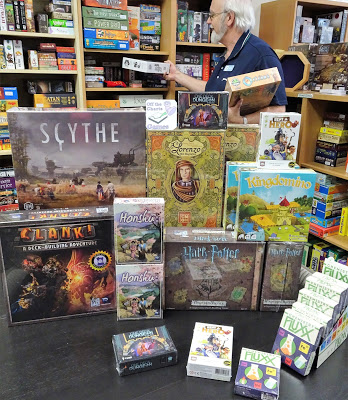 Here’s a look at the games that came in this week:

New Game!
Lorenzo dé Medici, also known as Lorenzo the Magnificent
was a wealthy powerhouse in Florence during the Italian Renaissance.  He was also a passionate patron of artists
and poets who expanded Italian glory.  New
from CMON is Lorenzo il Magnifico, a strategy game where players vie for the same
fame and prestige in becoming the most powerful and esteemed citizen of
Florence.

Lorenzo il Magnifico is a complex and strategic game with no
dependence on luck.  Players place their
Family Members in different areas of the city to perform actions, but these
Family Members are never the same as they change value every round.  They will conquer new territories, sponsor
magnificent buildings, encourage brave ventures, and surround themselves with important
characters.  If they are smart and
powerful enough, they can attract some of the most renowned contemporary
celebrities and use their powers.

New Game!
New from Renegade Games is Honshu, a map building card game for 2 to 5 players.

Honshu is played in rounds, with each round is divided into two phases. During the first phase, Map cards are revealed and the player who played the highest value card gets to pick first from those played. In phase two, the players use their chosen Map card to expand their personal maps. Each player must expand their personal maps to maximize their scoring possibilities. After 12 rounds, players will score points for lakes, forests, residential areas, and production of goods within their city.

Manipulating your position in the player order is crucial for mastering Honshu.

Scythe is an engine-building game set in an alternate-history 1920s period.

In Scythe, each player represents a character from one of five factions of Eastern Europa who are attempting to earn their fortune and claim their faction’s stake in the land around the mysterious Factory. Players conquer territory, enlist new recruits, reap resources, gain villagers, build structures, and activate monstrous mechs.

Watch this video by Dice Tower for a broader overview.

Back In Stock!
Kingdomino is a tile-laying family game for 2 to 4 players that plays in 15 to 20 minutes.

Each turn, connect a new tile to your existing kingdom, making sure at least one of its sides connects to a matching terrain type already in play. The game mechanics for obtaining the tiles is clever: the order of who picks first depends on which tile was previously chosen. Make sure to secure tiles with crowns- these royal treasures help to multiply the worth of your kingdom at the end of the game! The game ends when each player has completed a 5×5 grid, and then points are counted based on number of connecting tiles and crowns.

Newest to the Fluxx line of card games is Chemistry Fluxx, the elemental card game where the rules are always changing.


Chemistry Fluxx is the perfect compound of chance and skill – use atoms and laboratory gear to match the current goal and win.