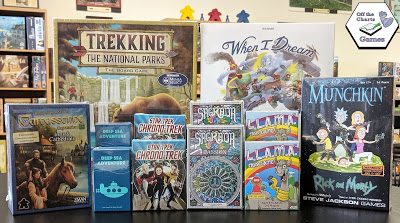 New this week are these small games:

Nominated for the 2019 Spiele des Jahre award and designed by Reiner Knizia is Llama a clever family card game for two to six players. Be the player at the end of the game to win.  The game is made up of a deck of eight suits of cards each with values one through 6, plus eight llama cards, and a pile of point tokens.  Players can only play cards from their hand to the center discard pile that increases the sequence of cards already played.  The object is to get rid of as many cards from their hand as they can to minimize the number of point tokens they will receive for cards not played.  The dilemma is knowing when to stop and freeze your hand or keep drawing cards in the hopes you will be able to play all in your hand thereby receiving no point tokens.

Also new is Star Trek: Chrono-Trek, a two to six player time travel card game set in the Star Trek universe.  Players take on a Star Trek character that is trapped in an alternate timeline.  They must use time travel to restore their history while also watching out for the other chrono-travelers changing the Timeline to suit their own needs.

A special grid of 36 cards is displayed in the center of the table, representing the current state of the Timeline of Star Trek history. Other cards include important Artifacts (such as Tribbles or the Guardian of Forever) and Inverters, which ripple reality and change the outcome of pivotal events. Your secret ID card tells you what parts of the Timeline you must change — or preserve — in order to win. But watch out for Q… he might just erase all of reality!

Sagrada Passion: The Great Facades is the first of the three Great Facades expansion for base game Sagrada. The base game, Sagrada is a dice drafting and window crafting game.
Sagrada Passion introduces new challenges to test your abilities.  Gain indivdual powers through inspiration cards, use rage glass dice to complete new private objectives, and be rewarded for carefully  meeting new symmetry and balance public objectives.  Additionally, this expansion takes it to up to 6 players.

Deep Sea Adventure is a two to six player mini-box game of risky treasure hunting in the depths of the sea.  Aboard a single submarine and sharing one oxygen tank, players take turns rolling dice and moving their pieces deeper into the sea with the goal of collecting and bringing back to the submarine more treasure than their opponents.  The more treasure they take the greater rate of oxygen depletion.  If anyone does not make it back to the submarine before the oxygen is depleted they lose their treasure.   At the end of three rounds the player with the most points wins.