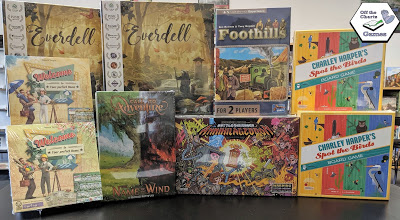 Here are our recent arrivals of great games:

New from Pegasus Spiele is Crown Of Emara, a worker placement, pick-up and deliver strategy game for one to four players.  Game play takes place over two modular boards.

During the course of the game players aim to satisfy as many citizens as possible.  The citizen tracks a players’ current Citizen Points on the scoring track.  Additionally, at the end of the game, all of a players’ citizens require housing.  A players’ Building tracks the current building points on the scoring track.  To win, players need to manage both the number of citizens and their housing.  A players’ final score will be the lower of these two.

We have an open copy of Crown Of Emara available for you to come in and play while you are here.

Adding to our selection of 2-Player games is Foothills, a tactical card game that takes two players on a railway construction through Wales.  You will use your five action cards to collect resources, remove rubble, build track and stations, then use the spaces you unlocked to collect victory points.  A game mechanic twist is that the action cards are two-sided with one side showing the primary version of an action and the other side showing the secondary version of a different action.  When the primary side is played it is then flipped to the secondary side.

The Name Of The Wind is an heroic fantasy expansion to the base game Call To Adventure, a storytelling game in which one to four players draft cards to create a character, face challenges, gain traits, and achieve a heroic destiny.  Every player builds a unique story, but only the hero with highest Destiny score wins.

The Name Of The Wind expansion provides over 80 all new cards.  Whether you attend the University or explore the Fae, learn the science of sympathy or the art of Naming, your adventure will never be the same.

After being missing in action for a while, Everdell is back in stock.  In this game, players will work to build a city of critters and constructions.  Everdell is dynamic game tableau building and worker placement that features a detailed world realized through beautiful artwork for one to four players.

New from Cryptozoic is Epic Spell Wars Annihilageddon, a deck-building game set in the Epic Spell Wars world.  Mayhem Events, Familiars, Legends, Wizards, Spells, Creatures, Treasure, and Wild Magic. It all adds up to an Epic Spell Wars experience unlike anything you’ve seen before.  The game comes with over 220 deck-building cards, 8 over-sized wizard cards that are compatible with the previous Epic Spell Wars card games, Dead Wizard tokes, Wizard ability tiles, and more.

Spring and Summer are two new thematic neighborhood expansions to Welcome to Your Perfect Home, a roll and write game without dice set in the 1950’s.

In Spring you’ll race to collect the Easter eggs around town. With Summer, you’ll  try to fulfill all the ice cream orders around town.  Both add new scoring mechanics to the hit, flip, and fill as well as new city plan cards.

Adding to our selection of kids games is Charley Harper’s Spot the Birds, a board game aimed at ages 7 and older.

Grab your binoculars and keep an eagle eye to the sky with Charley Harper’s Spot the Birds.  It’ll be a hoot!  Peregrinate through the board’s five habitats – the Backyard, the Desert, the Woodland, the Wetland, and the Shores –  and track each bird you spot.  Along the way, you’ll discover how to be a good bird steward.  But watch out – you’ll need to dodge storms, avoid falling in a river, and beware of birds that poop on your head (if happens).  Be the first to the Bird Sanctuary, and you’ll rule the roost!