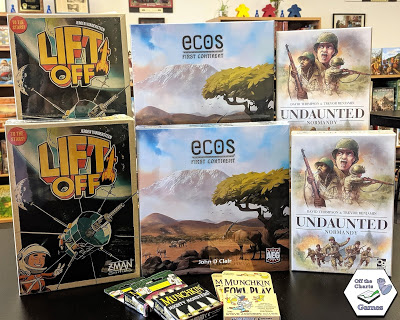 New from AEG is Ecos: First Continent a game of simultaneous play for two to six players.  With a modular board and tile placement mechanics, players are forces of nature molding the planet, but with competing visions of its grandeur.  They will have the chance to create a part of the world, similar but different to the one we know.  Which landscapes, habitats, and species thrive will be up to each of them.  Element revealed from the Element Bag give all players the opportunity to complete their cards and shape the continent as they see fit.

It’s to the stars in Lift Off.  The year is 1957, and the Space Race is on.  Lift Off puts players at the head of a fledgling space agency with dreams of taking the lead in the vast frontier of outer space. Two to four players will compete for the necessary engineers and scientists as well as develop technologies and build rockets necessary to launch ever more ambitious missions while working toward their secret objectives.  Can you send up the first satellites, mine minerals from asteroids, build an orbital trading post, or land on a new planet, but making sure you don’t overspend.
~ ~~ ~ ~~ ~ ~~ ~

Undaunted: Normandy is a two player campaign-driven deck-building game of tactical World War II combat.  Use your cards to seize the initiative, bolster your forces, or control your troops on the battlefield, but be warned:  every casualty on the field removes a card from yur deck, limiting your options and leaving you at the mercy of your opponent.

Munchkins: Mighty Monsters is a stand-alone card game for three to six players.  In Munchkins: Mighty Monsters you and your monster buddies are hanging out in the dungeon, just waiting to wallop some munchkins.  If you happen to get stuck and can’t play a card, the munchkins wallop you instead.
Included in the box are five hard-to-find promo cards for the classic Munchkin game.