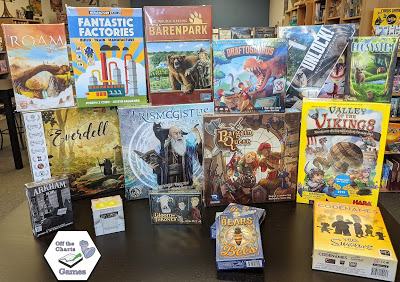 
Here are some of our most recent
arrivals:

Trismegistus: The Ultimate Formula is played over three rounds during which you will draft exactly three dice. By expertly utilizing the potency of your drafted die you will be able to transmute precious materials, collect alchemical essences, purchase and activate artifacts, and perform experiments that will progress you along four mastery tracks. You will also build a secret hand of publication cards which — together with the value of your Experiments, the completed formulas of your Philosopher’s Stone and your collected gold — will determine your final score in Victory Points and, perhaps, make you the greatest alchemist, able to rival Hermes Trismegistus himself!

The game features custom dice, the sides of which represent alchemical materials. At the beginning of each round, the dice are rolled and grouped by their respective types. On your turn, you must either draft a new die or utilize untapped potency of a previously drafted die. Based on the material associated with your chosen die, you will be able to collect certain essences in addition to the material to which the die is keyed. Additionally, the color of the die will determine which types of transmutations you can perform, refining raw materials and increasing your mastery of the elements.

Acquire precious artifacts in order to maximize the effects of your transmutations. Conduct experiments. Increase your knowledge and expertise and discover the ultimate formula!

~ ~~ ~ ~~ ~ ~~ ~
In Fantastic Factories you will race against other players to build the most efficient set of factories in the fewest number of rounds.  Careful manage your blueprints, train your workers, and manufacture as many goods as possible.

To accomplish this during the course of the game players will construct factories and monuments to expand your capabilities and raise your prestige.  Use training facilities to manipulate your dice rolls in a variety of ways.  Assign your dice as workers to factories to produce goods and resources.  And, pay contractors for special one time effects like rolling extra dice or drawing cards.

~ ~~ ~ ~~ ~ ~~ ~
Bargain Quest is a drafting game for two to six players. Players will take the role of competing shopkeepers in a fantasy town plagued by monsters.  Stock your shelves by drafting item cards and arrange your displays to attract heroes to your shop.  Equip your heroes to face off against the monsters.  If they succeed, fantastic!  If they get eaten alive, well… At least they can’t ask for a refund.

In the Valley of the Vikings, the annual barrel bowling contest is taking place.  Use the ball to knock down the right barrels and smart tactics to line up  the Vikings on the dock.  Skill and willingness to take risks are needed because players who overextend themselves on the dock and fall in the water go away empty-handed.  The player who capture the most gold coins wins.


In Reavers of Midgard, you’ll be looking to gain glory by raiding nearby villages for their riches, sacking well-fortified castles and battling both man and monster on the open seas. You’ll not only need to take your rowdy crew of vikings and the food needed to keep them happy along for the ride but you’ll also have to recruit a crew of elite warriors – the Reavers.

Reavers can be used in three different ways. They can be made your ship’s leader, earning you a one-time bonus and enabling your warriors to be more versatile in combat. They can also be used to rally more warriors to your cause, filling your ship to the brim with the right fighters for the right situations. Finally, they can also be used to help your crew specialize, earning you a bonus every time your crew sails into battle.

Whoever can earn the most glory after six rounds will be the winner.

Roam is another adventure game by Ryan Laukat of Red Raven Games (Above & Below, Near & Far).

In Roam, you and up to three friends compete to find lost adventurers. Tarot-sized adventurer cards include characters from Near and Far, Above and Below, City of Iron, and Islebound. The opposite side of each card depicts a landscape split into six squares, and two rows of three of these cards are placed in the center of the playing area to make the board.

Each turn, you may activate one of the adventurer cards in your party by flipping the card face down. Activating an adventurer allows you to place search tokens on the board in the shape depicted on your adventurer card. When every square on a landscape card has been searched, the player who did the most claims the card, finding the lost adventurer and adding them to their party. Each adventurer you add to your party gives you points and a new search pattern that you can use.

When searching, you also claim coins, which can be spent to use special actions or purchase artifacts with useful powers. When one player has ten adventurers in their party, the game ends, and the player with the most points wins.

~ ~~ ~ ~~ ~ ~~ ~
Codenames: The Simpsons (family edition) is the next themed Codenames game.
Two teams compete to be the first to identify all of their team’s Springfield Cards displayed on the grid. Only each team’s Cluemaster will know the location of the Springfield Cars their team is trying to find.  They give clues in the form of a code word that will help their teammates find these cards.  Be careful not to decipher a code incorrectly or you might help the other team.  It’s a race to identify all of your team’s cards first.

Lovelace & Babbage is historically motivated by the story of mathematician, Ada Lovelace, and engineer, Charles Babbage, inventor of the the Analytical Engine, a mechanical computer and direct influencer of the modern computer system. It cleverly blends the idea of programming math functions into a gaming style that makes players feel like they are plugging away trying to get a mechanical brain to do some heavy lifting for them.


During the game, players will complete mental math like the example above, trying to hit key numbers, collecting sets of symbols and earning actions that may prove beneficial in future rounds.

~ ~~ ~ ~~ ~ ~~ ~
Arkham Noir – Case #1: The Witch Cult Murders is a single-player card game inspired by the interconnected stories of H.P. Lovecraft and other authors, re-imagined as noir detective stories.  Gameplay consists of adding cards to open cases, creating lines of investigation, in an effort to solve them.  the ultimate goal s so score five puzzle Clue cards in order to piece together the big picture, before running out of time or mental stability.


Each newly shuffled deck is the start of a unique challenge, with adjustable difficulty levels to accommodate all level of players.

Ecosystem is another great game by Genius Games, publisher of strategy card games & board games based on real science.

Ecosystem is a biologically-derived card drafting game for two to six players.  Players choose, pass, and arrange eleven different card types consisting of organisms ranging from bees to bears and environments like streams and meadows.  They will earn points by aligning animals with habitats where they most flourish.  Biodiversity is rewarded while monocultures are penalized.  Each time you play, you build a one-of-a kind ecosystem, striving to balance the delicate connections between all living things.

~ ~~ ~ ~~ ~ ~~ ~
The C Team Pack a four character expansion pack that can be used with the original game Clank! A Deck-Building Adventure or with Clank! Legacy: Acquistions Incorprated.

Every Acquisitions Incorporated team has a story to tell, and this one is a doozq.  The members of the C Team have thwarted evil cults, been possessed by gods, even traveled through space.  So how hard could it be to sneak some treasure away from a dragon?
Included in this pack are four character figurines, character boards, and a 10-card starting deck for each character.

~ ~~ ~ ~~ ~ ~~ ~
Race to go out first in The Bears and the Bees, a strategic hexagonal tile laying game for two to five players.  Place cards by matching the colors on their edges while collectively building a hive that grows in size and complexity with every  passing turn.  Special cards, such as flowers, bears, and bees help you earn bonus plays, create obstacles, or deliver stings to our rivals.

Barenpark takes you into the world of bears, challenging you to build your own bear park. Would you like another polar bear enclosure or rather a koala* house? The park visitors are sure to get hungry on their tour through the park, so build them places to eat! Whatever your choices are, make sure you get the next building permit and use your land wisely! (No, koalas aren’t bears but they’re so cute, we couldn’t leave them out of this game!)

In more detail, each player in Barenpark builds their own bear park, attempting to make it as beautiful as they can, while also using every square meter possible. The park is created by combining tetrus-like tiles onto a grid, with players scoring for animal houses, outdoor areas, completed construction, and more. The sooner you build it, the better! Cover icons to get new tiles and park sections. The game ends as soon as one player has finished expanding their park, then players tally their points to see who has won.

~ ~~ ~ ~~ ~ ~~ ~
Replicants is a resource management card game for two to six players.  Each round your resource filed will change, so pay attention to what’s available and get what you need when you can to level up your Replicants in order to gain abilities, more replicants and of course points.

In this game, you hire workers to build buildings, and citizens
for your growing city. In each of the four stages of the
game, you are dealt a hand of five cards. From these, you
will choose a card to play into your tableau in one of three
possible ways. Then, all players pass their remaining cards
to the next player and choose again. A stage ends when all
the dealt cards have been played. In the end, the player with
the most valuable tableau wins.