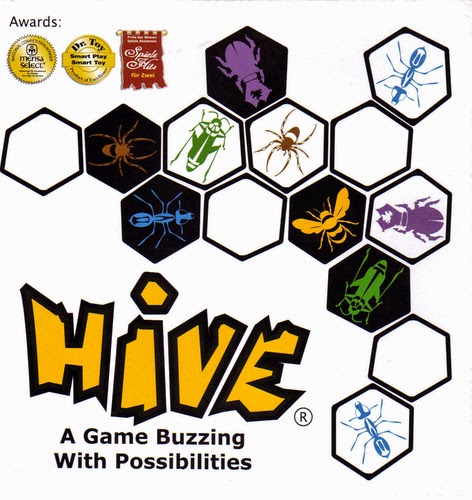 A game buzzing with possibilities.

Hive is a fantastic game for two, played with highly
tactile Bakelite tiles. The aim of the game is to be the first player to
surround your opponent’s Queen Bee using a team of assorted creatures of both
your own and your opponent’s color. Because each creature has its own way of
moving about the Hive, the game is sometimes called ‘nature’ chess’, yet
simpler rules, no need for a board and an added accessible game that can be
played anywhere. Simply great fun!

The soldier ants battle to keep control of the outside of the hive, whilst the Beetles climb up to dominate the top. Spiders moving into holding positions as the Grass Hoppers jump in for the kill. Keeping one eye on the hive and the other on your opponents reserves, the tension builds as one wrong move will see your Queen Bee quickly engulfed; …. game over!