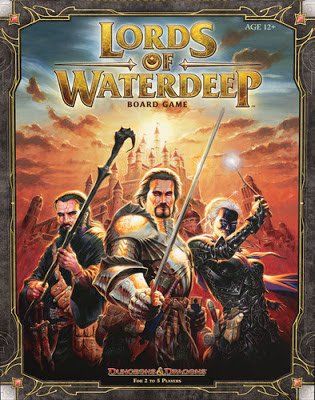 Gold and double-dealing flow freely in the City of Splendors

Ages 12+
Time 60
Players 2 – 5
Description
Lords of Waterdeep is a new
strategy Euro game from the world of Dungeons & Dragons (D&D).  This game is not the typical dungeon crawl
that you find in D&D’s other
games (i.e Castle Ravenloft, Wrath of Ashardalon, and Legend of Drizzt).  The basis of Lords of Waterdeep is the
completion of quests through city building and worker placements.

Players score victory
points for completing a series of quests.
Quests are completed by using four types of adventurers: Clerics, Fighters,
Rogues, and Wizards.  Completion of
quests brings rewards along with victory points.  Adventurers are gained through the use of
buildings put into play within the city of Waterdeep. Agents are the workers in this worker placement game. They can be placed in any of the basic buildings or in any of the advanced buildings that have been constructed by any of the players.  The various can grant adventurers, additional quests, and Intrigue cards. Intrigue
cards are one of three types: 1) Attack cards that hinder or penalize your opponent, 2) Utility cards that do something beneficial like grant resources, and 3) Mandatory Quest cards that can force opponents to complete a minor quest before finishing other quests.   A game of Lords
of Waterdeep last eight rounds.  The
player with the most victory points wins.
Each player will receive a Lord Card at the start of the game.  Each Lord card grants end-of game bonus victory points
for meeting certain conditions.

In summary, this is a
game with many levels of strategy.  Place
your agents in any one of nine basic buildings that are available every game or
in any one of the twenty four unique advanced buildings that can be constructed.  Collect the right mix of
adventurers to complete as many of the sixty quests as possible.  Use the buildings you control and your
intrigue cards to hold back your opponents and advance you own points for
completed quests and your secret agenda from your secret Lord card.  Happy questing.