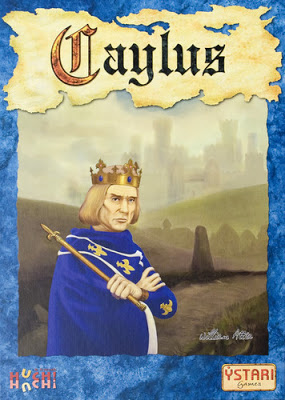 Once upon a time…

It’s 1289.
To strengthen the borders of the Kingdom of France, King Phillip has decided to
have a new castle built in the humble village of Caylus.
Around the building site a city is slowly rising up.  The players are
master builders.  By building the King’s castle and the city around it,
they earn prestige points and gain the King’s favor.  When the castle is
finished the player who has earned the most prestige points wins the game.

Caylus is a strategy game with each player
controlling a team of six workers.  The workers can be placed in either
the city or the castle.  Players have to develop the economic activity
along the road because huge resources are needed to build the castle.
Development is expensive so players must watch their money carefully.
Every time a worker goes to work the master builder must pay them.
Workers can work in another player’s building which will gain this other
player prestige.  To win a player must take advantage of their own and
other players’ buildings without giving away too much advantage.

Along the way,
production buildings become obsolete unless a lawyer transforms them into
residential buildings, which then brings additional income to players.
Play is also inspected by two royal agents, the bailiff and the provost.
The provost can be moved, for a price, to determine which buildings can
be activated each turn.  The bailiff constantly moves forward pushing the
pace for building the castle.  The castle is built in three stages:
Dungeon, Walls, and Towers.  Master builders must move quickly and well in
building the castle to accumulate prestige.  The player who earns the most
prestige points will be the winner.

Caylus is a strong economic strategy game with
seven phases per turn and many ways to achieve points and victory! 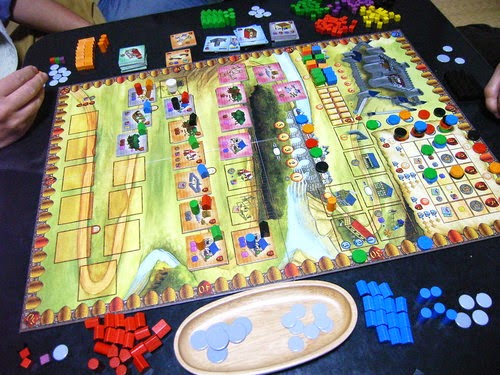 We have an open copy of Caylus available in
our Demo Games Library for you come in and try out.