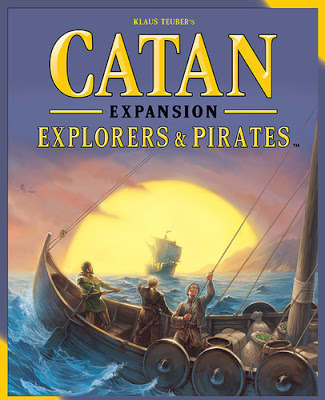 If you are looking for a
way to change up your Catan play, the Explorers & Pirates Expansion is a great way to do it.  This expansion takes the Catan resource management base game and turns it into
a resource management – pick up and deliver – mad dash to get victory points’
game.
With the Explorers & Pirates Expansion, the game begins with 3 islands.  The starting island is very “Catan”
like.  The other 2 islands are unexplored
and the key to the game changes.  Each
player starts with 1 settlement and 1 harbor settlement.  Harbor settlements are worth 2 victory
points, but do not double up resource production like cities do in the base
game.  Cities are not used in this
expansion.  Harbor settlements start with
1 ship rather than a road.  Ships are
used to transport crew members and settlers to the islands and to transport
fish and spices back to the base island.
A game turn has 2 distinct phases.
The 1st phase is the traditional role of the dice, get resources, trade
and build.  With this expansion there is
a significant change in getting resources in the event a player does not
receive a resource, they will receive one gold coin.  The only time you will not get anything is
when the infamous 7 is rolled.  During a
player’s turn twice they can exchange 2 gold coins for a resource of their
choice.  Players almost always get
something and almost always can do something on their turn.  This game really feels like a constant flow
of actions.
The second phase of a
player’s turn involves moving their ships.
Up to 3 ships can be moved each turn. The early game is spent exploring
the 2 new islands.  Land on a tile, flip
it over and receive a resource of that type or 2 gold coins.  The new island consists of standard resource
tiles, pirate lairs, fish shoals, and spice tiles.  Once these tiles have been discovered they
become available to build settlements on.
To build settlements on these tiles a player must buy a settler, place
it on a ship and sail to the desired discovered location.   Both the settler and the ship are then relinquished
in order to place your new settlement.
Once there, players can build roads and more settlements on the new
island.  Upgrading a settlement located
on a coastline to a Harbor settlement will gain additional victory points.  A Harbor provides you a place from which you
can launch ships, pick up settlers, and pick up crew members.  Crew members have 2 purposes; first, they can
defeat pirates gaining you victory points and turning the pirate’s lair into a
gold mine for future settlements that will yield gold coins.  Secondly, they can be exchanged for shipments
of spice.  Spice delivered to the base
island also gain you victory points.  Additionally
victory points can be gained by picking up and delivering fish to the base
island.
Explorers &
Pirates game ends when a player
reaches 17 victory points.  Points are
scored for settlements, harbor settlements, defeated pirates, and deliveries of
spices and fish.  During the game additional
victory points can be gained for being the best conqueror of pirates, the best
spice merchant, and the best fisher.
These additional points can be moved from player to player just like the
longest road and largest army do in the Catan base game.
One of the things I
really like about the Explorers & Pirates expansion
is the flow.  Receiving the gold coins
when you don’t get resources gives players the ability to do something virtually
every turn.  Even without buying, players
will always get to move their ships – 3 of them running all over the board.  Even though “7” still forces the card hand
limit of 7, the pirate ship in this game is less inhibiting than the robber in
the base game.  Players get to replace
the existing pirate ship with their own and steal a card, but it does not block
resource production and other players can pay gold to move past the
pirate.  This game just doesn’t bog down.
Another thing I find intriguing is
the options available for replays.  There
is a lot of variety just with the randomization of the 2 undiscovered islands,
but the door is open to randomize what tiles go on which island.  This expansion is something we can play
around with for a long time. 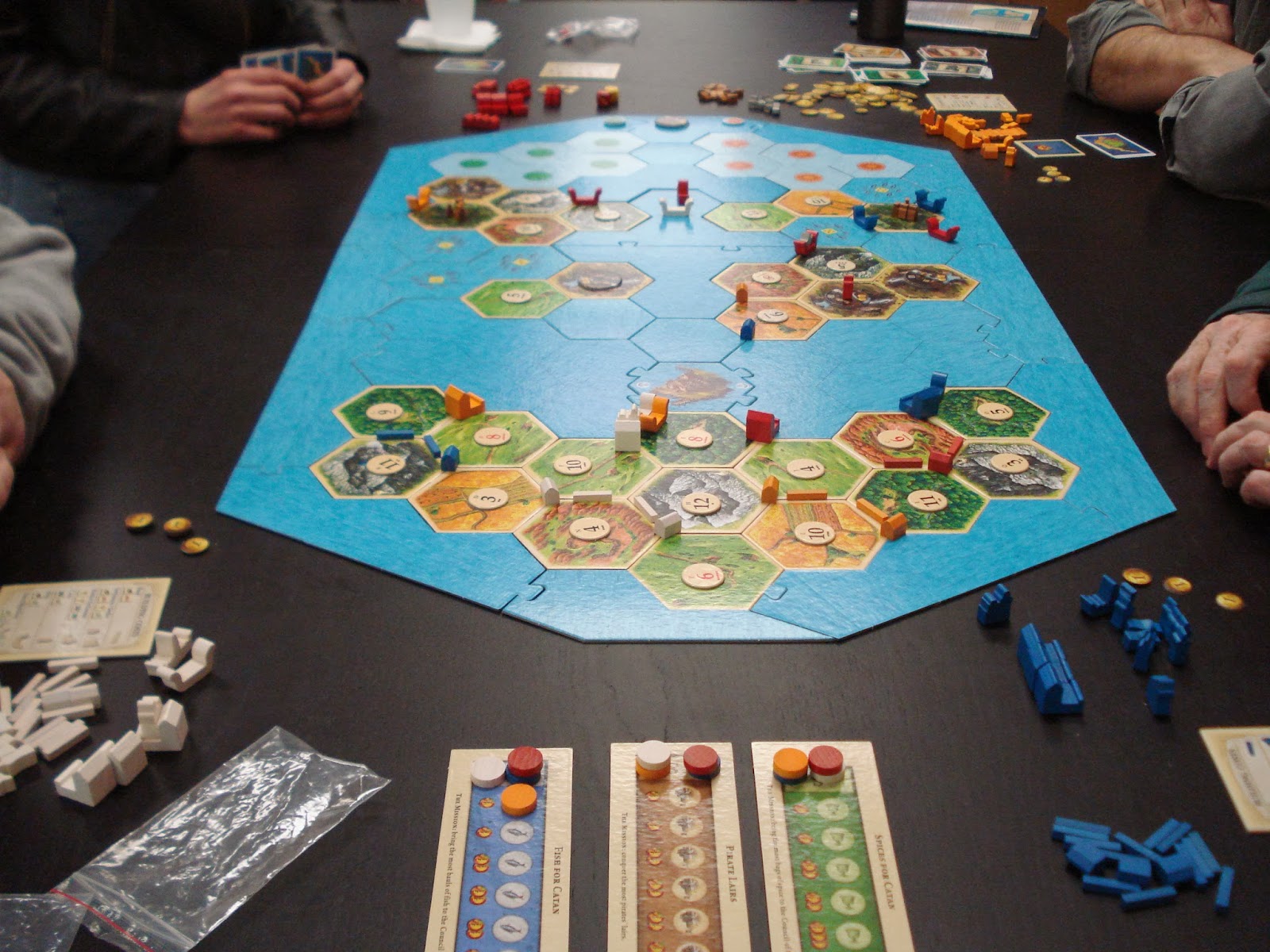 We have an open copy of both the base game Catan and the Explorers & Pirates Expansion available in our Store Demo Games Library for you come in and try
out.