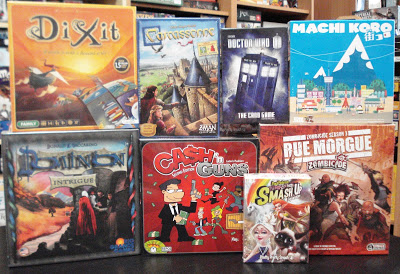 It’s a week of restocks.  Here’s a look at the games back in stock:

Ca$h ‘n Guns 2nd Edition  is a party game of bluff and gangsters for 4 to 8 players.  Winner of the 2014 Golden Geek Board Game Award.

Gangsters have just committed the robbery of the century, but now comes the most difficult part: sharing the loot!

Gathered in an abandoned warehouse and armed with a foam gun, each player takes on the role of a gangster shooting it out for the biggest share of the loot.  At the end of  8 rounds the winner is the player with the most valuable loot and still alive.

Machi Koro is a quick breezy city building, dice rolling card game from Japan.  The box says it’s a 30 minute game and with 4 players it might take that long.  A 2-player game will be much quicker.  The object of the game is to be the first player to activate all 4 of their landmarks.
Learn more about this game from our Game Profile: Machi Koro.

Zombicide Season 3: Rue Morgue, a cooperative game for 1 to 12 players.  The game includes 80 miniatures, 12 experience trackers, 9 double-sided game tiles, 155 mini-cards, and more. While it is a standalone game it can also be combined with the other Zombicide base games and expansions.

Take the lead of a survivor team and harness its members’ unique skills to achieve victory against hordes of zombies! The infected creatures are controlled by simple rules and a deck of cards. Play 14 missions on 14 different maps made from the included modular map tiles, or create your own.

Doctor Who: The Card Game is based on the BBC TV series.

Daleks! Cybermen! Sontarans! The list of threats is endless and no place in the universe is ever truly safe from danger. But there’s one man who’s made it his mission to defend the defenseless, help the helpless, and save everyone he can. The Doctor!

Players will not only defend the universe with the Doctor and his companion but also exterminate their opponents with Daleks, Cybermen and other enemies.

Carccassonne is tile-placement game that is an easy to learn and play family game.

This latest edition now includes the River and the Abbot mini expansions. The River gives you a new place to start while the Abbot brings gardens and provides for more scoring options.

For those who are not familiar with this simple tactical game you can read our Game Profile write-up by clicking on Carccassonne.

How cute is Pretty Pretty Smash Up, the latest expansion to the base game Smash Up?

Pretty Pretty Smash Up brings the sweetest factions ever to the vicious fight for victory! Kitty Cats use their incredible cuteness to take control of enemy minions. Princesses ply their royalty, beauty and even their love to get their way. Fairies’ fickle tricks give you options like never before, while the herds of Mythic Horses work together for dominance. Get ready: your opponents will never know what hit them!