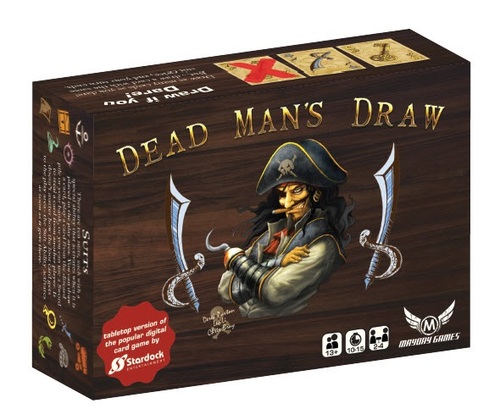 What’ll be matey? Draw if you
dare.

Classification Card Game
Mechanics Press-Your-Luck
Publication Mayday Games, 2015
Ages 13+
Time 10 – 15
Players 2 – 4
Description
Dead Man’s Draw is an incredible
filler game for when you want something light.
This press-your-luck pirate-themed game features a deck of loot cards
and a deck of pirate trait cards. The loot cards are comprised of 10 different types
– cannon, oracle, treasure map, anchor, chest, etc. with each type having a
specific pirate like action.  Additionally,
each loot card indicates an end of game scoring point value.  A Cannon’s action is to send a card from an
opponent’s scoring area to the discard pile, whereas the Oracle lets you preview
the next card on the loot deck. The pirate trait cards each enhance the ability
to use one of the 10 types of loot.  A Scavenger’s
trait allows the player with that trait card to keep the cards stolen from an
opponent with a cannon’s action instead of sending them to the discard pile.

The object in a game of
Dead Man’s Draw is to have the best stash of loot in your
play area when the loot deck is exhausted.
Each player begins the game with a pirate trait card.  A player’s turn consists of turning over the
top card of the loot deck, placing it face up in the play area and completing
the action associated with that loot type.
Next, the player decides whether to continue to draw again or not.  The player can quit and take the face up cards
placing them in their scoring area, or they can continue to draw more loot
cards.  Anytime a second card of the same
loot type is drawn the player busts and depending on the type of loot in the
play area all or most of the face up cards will go into discard pile.  So beware of the Kraken as its action
requires the player to draw and play 2 more cards many times causing a
bust.  When the loot deck is exhausted
each player adds up the highest value of each loot type in their scoring
area.  Most points wins.


Dead Man’s Draw is 15 minutes of pirate fun in a small box ready for play at home, at the beach, or in the local coffee shop. 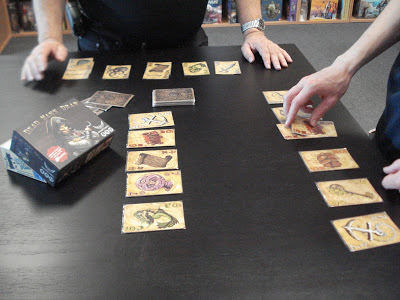 We have an open copy of Dead Man’s Draw available in our Demo Games
Library for you come in and try.