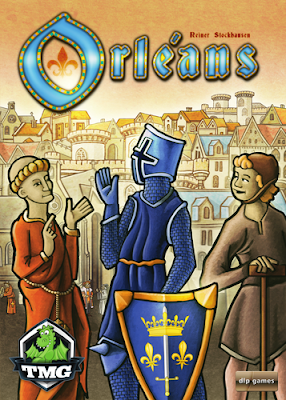 Classification Strategy Game
Mechanics Pool Building, Point to point movement, Worker placement
Publication Tasty Minstrel, 2015
Ages 10+
Time 45 – 60
Players 2 – 4
Description
Orleans is a bag building,
worker placement strategy game in a medieval setting.  Unlike many worker placement games where all
workers are placed on a central board and only one worker can occupy a space,
in Orleans each player has their own board and 7 different types of workers to
place in a variety of locations.  This
game does not require players to get to a spot first, it is all about how
effectively a player can blend together the right set of workers at the right
time to collect more points at game end.

Players begin with 4
workers, a farmer a boatman, a craftsman, and a trader.  At the start of each turn players draw a
number of workers out of their bag.  This
starts at 4 workers, but can be increased up to 8.  Then players assign their workers to spaces on
their player boards.  All actions require
more than 1 worker to be assigned.  Each
type of worker has specific spaces where they can be used.  There are 10 different actions that can be
triggered with the right combination of workers.  The castle, farm house, village, university
and monastery each bring an additional worker of a certain type to be placed in
the player’s draw bag.  There is a
knight, another farmer, boatman, craftsman or trader, a scholar and a monk.  The monk is wild and yields no additional
action when it is acquired.  Each other
worker brings with it a move up on a specific track that yields an additional
benefit.  The farm track gives players
goods tiles for game end scoring.  The
craftsman track gives players a technology token that is used to permanently
occupy an action space.  The trader track
gives the player a building tile that will allow that player an additional
action space for the rest of the game.
The boatman track gives the player coins that score points at game
end.  The knight track gives the player
the ability to draw additional workers from their bag each round.  The scholar track moves a player’s marker up on
a development track that will yield coins and a multiplier for points at game
end.

Half of the main board
is occupied by the various tracks.  The
other half is a map with many cities with goods tiles randomly placed between
them.  Players can collect the goods by
traveling between the cities, sometimes by ship, sometimes by wagon when the
right action spaces are activated.
Players can build a trading post in in each of the various cities.  These trading posts will be used to score at
the end of the game.
There is 1 additional
board to mention.  It is called a
beneficial deeds board.  By placing
workers in the town hall action space players can effectively retire workers
from the game and gain a benefit for doing so.
There are 7 different deeds to send them to, each yielding coins to the
player.  This is the method to balance
the number of workers available for a player to draw from their bag.  It only takes a couple of turns to acquire
more workers than can be drawn from the bag on a turn.  Sending workers to the beneficial deeds board
can be beneficial.
There are 18 event
tiles randomly stacked at the start of the game.  One is turned over each turn with the effects
happening at the end of the turn.  Six of
the tiles help players along.  Nine of
the tiles will end up costing players either money or goods tiles.  There are 3 tiles that force players to draw
a random worker out of their bag and return it to the supply on the main worker
supply.  This is not the most efficient
method to balance the worker pool.  Players
do have that turn to make sure they have the coins or goods needed.  To a certain extent players can even manage
the workers in their bag that could get drawn and lost to the plague tile.  Any worker not being used to activate an
action space stays on the player board until the next round and cannot be drawn
and lost.
There is 1 more
scoring element.  They are called
citizens.  This is one part of the game
where players will race to get something.
Three citizens are located at various spots along the development track
that is activated at the university.
There is 1 citizen at the end of the boatman track and an additional 1
near the end of the knight track.
Another 7 citizens are available to the player who fills the last
remaining spot in each of the 7 areas on the beneficial deeds board.  Players need to be aware of how close they
are to completing any of these deeds.
Their next play may be setting up someone else to grab one of the
citizens.  At the end of the game the
number of citizens are added to the number of trading posts and multiplied by
the distance covered on the development track.

After 18 rounds the
game is over and coins are worth 1 point each.
There are 5 different goods available and they score from 1 to 5 points
each.  These points are added to the citizen,
trading post points and the player with the most points wins.  The scoring is well balanced between the
different methods.  Games always seem to
be closely contested.
If all this sounds
complex, the actual game play is not.
Players draw a handful of workers from their respective bags and then
put them to use as effectively as possible.
Like any good worker placement game, players can never come close to
doing everything they need to do.
Orleans adds the element of having to balance the number of workers of
each type they have in their bag.  In addition
there are 20 different buildings available through the trader track.  Each of them uses a different set of workers
to give the player another action at their disposal.  Orleans comes with a great set of boards,
high quality components and a ton of replayability.

We have an open copy of Orleans available in our Demo
Games Library for you come in and try.