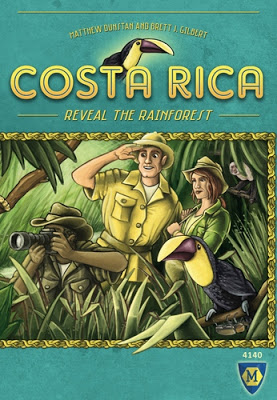 Set out to explore Costa Rica
and discover the wildlife of its rainforest: toucans, monkeys, jaguars and
more!

Classification Family Game
Mechanics Set Collection, Press Your Luck
Publication Mayfair Games, 2016
Ages 8+
Time 30 – 45
Players 2 – 5
Description
Let’s charge into the
jungles of Costa Rica in search of exotic animals.  With any luck we can find 3 types of
relatively common animals; a Chestnut-Mandibled toucan, a Basilisk, or a
Capuchin monkey.  It will take even more
luck to find a rare Jaguar, a Red-eyed stream frog, or a Rhinoceros
beetle.  These animals can be found in
one of 3 different terrain types; wetlands, highlands, and forests.
The object of the game
is to collect the best set of animals using your 6 explorers that you start the
game with.  The board is constructed of
61 hexagon terrain tiles with animals on the back of each.  Six groups of explorers containing an
explorer for each player are placed at each corner of the hex-shaped
board.  The first player, as expedition
leader selects one of these groups of explorers to move to an adjacent
tile.  This tile is flipped over
revealing the animal(s).  The expedition
leader then decides if he/she wants to keep this tile or pass and let the
others, in turn order to also choose or pass on the tile.  If no one takes the tile the leader flips
over another tile adjacent to the first tile and then decides to take all of
the revealed animals or pass giving the same option to the others in this
expedition group.  When a player decides
to take the animals discovered so far, they take the tiles and place them face
up in front of them and remove their explorer from that expedition group.  That explorer is finished exploring for the
remainder of the game.  On another
player’s turn he/she can choose to explore with that group as long as they still
have an explorer in the group.  The first
player pawn moves to the next player who begins a new expedition.
There is one small
catch during an expedition.  In addition
to animals on the flip side of the terrain tiles, there could also be a
mosquito attached to the animal.
Mosquitoes are considered a threat and revealing a second mosquito ends
the expedition and that round.  The
mosquito tiles are discarded but the leader gets to keep any remaining tiles
and must remove his explorer from the expedition.  A new round is started with first player
(leader) moving to the next player who then begins a new expedition.
The game ends when all
explorers have been used or all tiles have been explored and claimed.  Players score points for each set of animal
type.  The more of an animal in your set
the greater the points, i.e. 3 jaguars are worth 6 points while a set of 5
jaguars are worth 15 points.
Additionally, you gain 20 bonus points if you have at least one of each
of the 6 types of animals.  The player
who scores the most points wins.
Costa Rica is a great family game
that’s easy to learn and play that provides press-your-luck challenges.  Each terrain type has a different chance of
finding two animals instead of one, as well as differing levels of mosquito
danger.  Do I go for the rare jaguars to
try and complete my set of different animals knowing that the mountains where
they reside has the greatest mosquito threat or do I play it safer and head for
the forest that has the least amount of mosquitoes?  Do I try to become the last member in an
expedition group surrounded by tiles all to myself which may yield some great
finds? 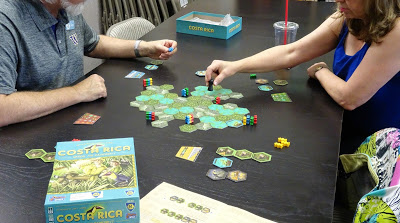 We have an open copy of Costa Rica available in our Demo
Games Library for you come in and try.