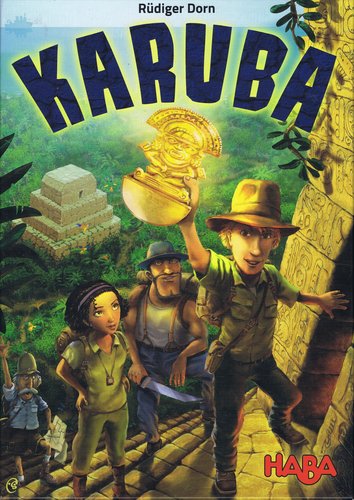 Classification Family Game
Mechanics Tile Laying, Point-to-Point Movement, Simultaneous Action
Publication Haba, 2016
Ages 8+
Time 30-45
Players 2 – 4
Description
Karuba is a family friendly game from designer Rüdiger Dorn.  Each player gets their own player board, 4
adventurers, 4 temples and 36 tiles numbered from 1 to 36 with various paths on
them.  The object of the game is to get
your brown adventurer moved to your brown temple faster than your
opponents.  The same goes for your blue,
yellow and purple adventurer.  The first
player to move their adventurer to its temple of the same color gains 5
points.  Lesser points are gained by the
second, third and fourth player to get to the right temple.  Along the way, adventurers can stop and pick
up crystals and gold nuggets for points as well.
To set up the game the
first player selects one of their colored adventurers and places it on a beach
location and its matching temple on a jungle location on their player
board.  From their supply, all other
players will place this same color adventurer and temple in the exact location
on their board.  Then the player to the
right selects another color adventurer and matching temple and places them in
the same manner on their board with the other players doing the same
thing.  This placement continues until
all 4 adventurers and temples have been placed at which point all boards will
have the identical setup.  The first
player then scrambles their 36 path tiles face down.  All other players will place their tiles face
up for easy access.
Each turn begins with
the first player drawing one of their facedown tiles, turning it over and
announcing the number.  Every player
takes their tile of the same number and either places on their board to build
paths that later their adventurers will move on, or count the number of path
exits on that tile and move 1 of their adventurers that many tiles along a
path.  Each tile has from 2 to 4
exits.  Four tiles have gold nuggets and
ten tiles have crystals pictured on them.
When an adventurer ends its movement on one of these tiles, the player
claims the object.  The first player
continues drawing and announcing tiles until either all tiles have been drawn
and played or a player has managed to get all 4 of their adventurers moved to their
matching temples thus ending the game.
Players then tally their points: 5 or 3 points on the claimed temple
tokens, 2 points for each claimed gold nugget, and 1 point for each claimed
crystal.  The player with the most points
wins.
After playing Karuba, I find it to be a bit more challenging than it appears on the
surface.  You definitely have to strike a
balance between creating the right pathways and having enough path tiles to get
your adventurers to their temples. 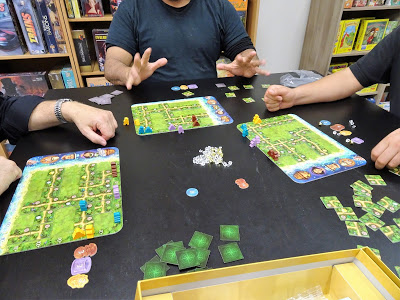 We have an open copy of Karuba available in our Demo Games
Library for you come in and try.