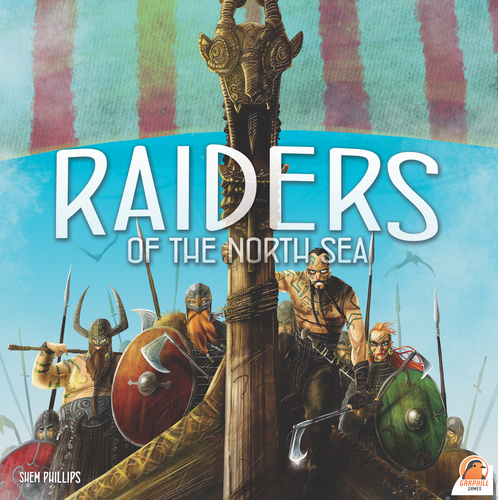 Description
Vikings, prepare to
raid settlements, take plunder and make offerings to the chieftain.  In Raiders Of The
North Sea each player will need
to hire a crew, amass provisions and gain armor. Then they will set off to raid
harbors, outposts, monasteries, and fortresses.
Harbors are the easiest to raid, but yield less plunder.  Fortresses are hard to raid, but provide the
most plunder.  After a raid players may
need to reload crew and provisions to get ready for the next raid.  Provisions are necessary in order to launch
raids.  Sometimes, alas, players can lose
crew members in a raid.  Crew members not
returning from raids earn Valkyrie, and Valkyrie can earn points.
Raiders Of The
North Sea is a worker placement game.  It has a great twist in the way it
works.  On each turn a player will place
a Viking on an action space performing the respective action and then remove a
Viking from another action space performing that respective action.  There are 3 different color Vikings and each
is effective only on certain action spaces.
The Viking removed for the second action is the one that will be used to
place at the start of the next turn.
This creates some interesting tension, i.e.  a player needs a gray Viking for the next
turn, but the action they want to take is occupied by a black or a white
Viking.
The winner of the game
is the player with the most points.  The
player with the most points is the player that raids the best and uses their
plunder to best to gain victory points.
Some points can be gained by raiding the various locations.  Those points can go up by having a more
successful raid using more armor, stronger crewmen, and a little luck with the
dice roll.  Points can also be gotten by
using plunder to make offerings to the Chieftain.  There are 3 offering tiles available
requiring a mix of plunder to be satisfied.
Points are awarded for purchasing substantial amounts of armor.  Additionally, points are awarded to earning a
lot of Valkyrie.  Therefore, losing crew
members isn’t all bad.