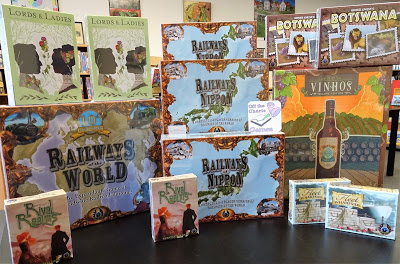 In this week’s shipment of Eagle-Gryphon Games is the newly released Railways of Nippon.  Here’s a peek at the games that hit the shelves:


Railways of Nippon is a 2 to 4 player stand-alone version of Railways of the World with a new map.  Players will create their own railroad and issue bonds to raise needed capital. Build track and link cities of your choice while competing for the most profitable routes.  Deliver valuable goods and reap greater profits for longer deliveries. Upgrade your locomotive and travel the longer, more lucrative routes.  Well time infusions of cash can help you pick up steam but taking too many bank bonds may hinder your ultimate goal of becoming the richest railroad baron of Japan.

Rival Realms is an adventure card game for 1 to 2 players.

You and your opponent are rival magicians who are transported to the mystical world of Fantastiqa.  With only a shared pack of magical cards, you will compete to summon landscapes, explore diverse regions, recruit fabled beasts, and embark on quests.

Players play cards from their hands to create Regions and to go adventuring in each of their Rival Realms. By collecting Adventure Tokens, players gain the assistance of Creatures and Artifacts which allow them to perform special actions that help them explore further. The player who scores the most points by creating and exploring Regions, connecting Regions of the same type, and by completing Quests wins the game.

Railways of the World is a 2 to 6 player game.  You’ll revisit the early days of the Age of Steam as you begin with a locomotive (the venerable John Bull, the first locomotive to run in North America) and a vision (your Tycoon “mission” card). From there, build your budding railroad network into a vast empire. Earn the most money, develop bigger and faster locomotives.

The 10th Anniversary Edition includes updated maps for Eastern U.S. and Mexico as well as an updated and revised rulebook compendium that covers all base games and all expansions.

In Vinhos, players develop their estates with vineyards and wineries, producing the highest quality wines and selling them for profit and victory points.
The game takes place over six years as players work to expand their businesses in the different region of Portugal.  Hire skilled enologists and capable farmers to increase the quality of your wine, but keep a careful eye on the changing weather which will affect production at the beginning of each year.

Fleet Wharfside is a stand-alone card game set in the Fleet universe.  The fleet has come home and in Wharfside its captains must fulfill contracts form local Ridback Bay Busineseses.  Each turn players will either collect fish from their fleet at the wharves or purchase a contract from the market.  Contracts provide a bonus while in play, but once they are completed the bonus goes away too.

Lords & Ladies is a 2 to 5 player card game where you control a turn of the 20th century noble family and their servants.
The goal is to raise your family’s status through careful marriages, hiring servants and having children, all the while destroying rival families through gossip, backstabbing and using superior wit. Status is gained and lost during the game as players compete to be the first to end a round with 18 status points.

Botswana is a family card game with animal figurines for 2 to 5 players ages 7 and above.  Botswana is fast to learn with easy and quick rules.

On safari in Botswana, you might be able to spot lions, rhinos, elephants, leopards, and zebras.  In this game you will spot them for sure!  But can you guess which ones will be worth the most at the end of this safari?   Play the right cards at the right time, collect the best animals, score the most points and win the game.