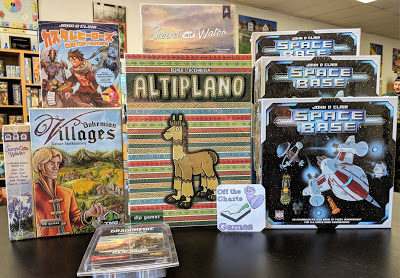 This week’s game arrivals has several new games.  Here’s an overview of the new games in this week:

After much anticipation, designer Reiner Stockhausen’s (Orléans) new game Altiplano has arrived.  Altiplano is set in the South American highlands, where players must be creative to develop the available resources and vegetation of the high plateau between the eastern and Western Andes.


Altiplano is a resources management, bag-building game for 2 to 5 players.  There are 7 modular location tiles each representing a different region (village, market, harbor, road, farm, mine, and forest) and make up the central play area or the plateau.  Each player will have an action board, a warehouse board, a bag, a discard cart, and a player pawn.  The actions on the player’s action board correspond to the regions. In order to activate a particular action your player pawn must be on the respective region. At the beginning of the game each player receives a role card that provides their starting resource and a special ability.  There is also the option to use secret goal cards to enhance the options for game end points.


The game is all about building your bag full of resources to use in multiple ways to generate points.  Points can come from the resources themselves, from cards claimed from various regions and from filling rows in your warehouse.  Players draw a limited number of goods each round from their bag, then those resources get allocated to set up actions for this and future rounds.  The player who handles these various options the best will be the winner.

Another new game by Reiner Stockhausen is Bohemian Villages, a dice merchant placement game for 2 to 5 players.

The objective in a game of Bohemian Villages is acquiring the most coins.  You do this by occupying the various buildings on the various village tiles. The central play area is made up of up to 9 double-sided village boards.  Each village is made up of different buildings (bakery, dairy, flour mill, glass factory, farm, etc.).  On your turn you will roll 4 dice and place one or two of your merchants on up to two buildings.  The buildings you chose will be dependent on your dice combinations.  Each of the buildings will yield something different.  Some buildings when occupied only score at the end of the end of the game.  Others will need to have other occupants on that village card in order to score.  Additionally, once certain types of buildings are fully occupied, players can get booted out by another player.  The game ends when a player at the start of their turn has no merchants to place, final scoring takes place and the player with the most coins wins.

New Game!
New from AEG is Space Base, an intergalactic dice game of fleet management for 2 to 5 players.

Space Base is a dice game where players draft ships (cards) into their Command Console (player board). Every turn, no matter whose turn, players harvest rewards from their command console, whether those rewards are an increase in your baseline income, credits for the next turn, influence or some other powerful effect that will lead you to victory. Players are involved and engaged on every player’s turn, from the first roll of the dice to the last.

Note: We have an open copy of Space Base and will be doing a special Demo Session, this Saturday, May 5th from Noon to 5 pm.  Come and learn all about Space Base.

Also new from AEG is Custom Heroes, a fantasy card crafting game for 2 to 6 players.

Custom Heroes is a fast-paced, strategic game of set building and strategy. The objective of the game is to get rid of all your cards faster than your opponents. You can play sets of cards that have the same or greater value and the same number in the set as the previous player, but you have to balance the use of high value cards vs. the risk of getting stuck with low value cards in your hand as other players finish before you.

The twist in Custom Heroes is that as you play you earn and spend Power resources which allow you to Card Craft the cards in your hand by sliding upgrades into their sleeves that overlap the card and upgrades already present to alter the value and special abilities of your cards. As each round passes the cards become more and more valuable and complex!

Custom Heroes uses a clever system of winning victory points to determine who is the ultimate winner of the game and there is a wagering mechanic that can allow for wild swings and surprise come from behind victories.

New in from Pencil First Games is Sunset Over Water is a card game with beautiful landscapes.

Over six days, players gain Renown by hiking to beautiful locations to paint landscapes, which they’ll later sell.  Each day, players choose a Planning Card, which allows them to travel through the Wilderness and paint (pick up landscape cards).  At day’s end, they can turn in Landscape Cards to gain Commission cards worth Renown (points).  Players also earn renown by completing Daily Goals and by possessing Landscape Paintings at the end of the game.

Game Expansion!
Sea Of Swords is the third Adventure Pack for the base game Dragonfire, a cooperative deck-building game set in the the Dungeons & Dragons world.  In this adventure pack dangers lurk along the coast and in the depths.  Challenge two new Encounter Decks introducing an all-new environment, Coastal.  Discover new magic Items and Market cards.