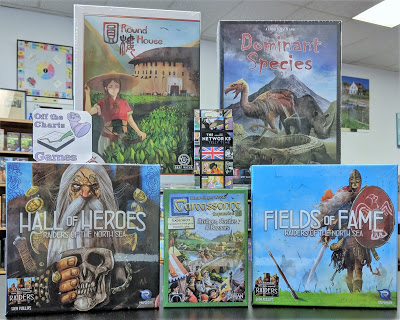 Here’s a look at the exciting games that came in this week:

New from Deep Water Games is Round House, an economic game that is long on strategy, low on luck, and has an interesting 2-tiered roundel mechanism. Round House is centered on a type of Chinese rural dwellings dating back to 17th century Ming dynasty  The Round House served as housing and protection for its residents
under unified culture and commerce – a village within walls.  By cleverly navigating pawns around the Round House and manipulating
faithful family members, players assume the role of the head of a family
attempting to lead their members to glory.

Players will move their family leader token clockwise around the round house, from room to room, and dispatch their assistants to perform all sorts of actions.  Each room will have actions that players can take in order to
collect resources, recruit experts, and fulfill order cards.
Doing these things will gain prestige points. When a family leader token moves to the Ancestral Hall
stand, it must stop its movement, and the active player must
take their family to the temple to worship their ancestors
and leave one member behind to serve the temple. Through
this act, the player will gain resources, amulets, and prestige
points. Once a certain number of assistants in the temple has
been reached a certain number, the game will come to an end
and prestige points will be calculated. Whoever earns the most
prestige points is the winner.

Round House has plenty of replayability due to the variable setup including contracts, experts, amulets, temples, and especially the modular outer ring of the roundel.
~ ~~ ~ ~~ ~ ~~ ~

New Game!
In from Plan B Games is Century Golem a re-themed version of the ever-popular Century Spice Road.  In Century Golem as in Century Spice Road, players are caravan leaders who travel to deliver crystals instead of spices to the far reaches of the world.  The game includes 5 caravan cards, 43 merchant cards, 105 crystals, crystal storage containers, metal tokens, and more.

New Game!
Also in from Plan B Games is Century Eastern Wonders the 2nd in the trilogy of games each set in different centuries, from the 15th to the 17th that depicts the major trading systems and routes of these eras.  This is a stand-alone game that can also be combined with Century Spice Road.

In Century Eastern Wonders the game is played out on a modular board where players will  create unique maps as they take to the seas to establish trading posts to get the spices you need to deliver to the appropriate ports for victory points.  Additionally, special benefits can be gained by establishing a trading post in each of the 4 types of markets.
~ ~~ ~ ~~ ~ ~~ ~

Telly Time is a mini expansion to the base game The Networks, a card drafting strategy game.

Welcome to the United Kingdom! Telly Time is a UK focused mini-expansion for The Networks that adds 3 new Genres, plus a Genre Bingo card that gives players a new way to score Genre Bonuses. Itʼs a completely new way to play the game!