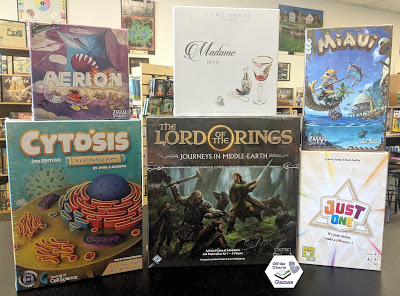 New games keep arriving along with more must have favorites.

Form your Fellowship and set out on your own adventures in The Lord Of The Rings: Journeys In Middle-Earth, a fully-cooperative, app-supported board game set in J.R.R. Tolkien’s iconic land of Middle-earth! As the dark forces gather, players band together to unravel mysteries, make courageous choices, and fight against the evil that threatens the land.

No matter if you choose to set out on your own or venture forth with four other players, a free companion app takes control of the evil forces arrayed against you, freeing you and your companions to stand together in a single Fellowship and battle against the darkness. What’s more, the app guides you through entire campaigns, filling each adventure with content from a host of possibilities and allowing you to leave your own mark on Middle-earth.

New Game
Newest in the Ominverse line of single-player is Aerion. In Aerion, you are an inventor of flying machines that are used by the dreams to traverse the skies of the Oniverse.

Roll dice to acquire the components you need to build airships.  Improve your rolls by discarding cards being careful not to discard too much and exhausting  your resources.   Build the most beautiful fleet that ever soared before your resources run out.

New Game
Cytosis is a cell biology game that transports players inside a human cell and puts them in control.  In this scientifically accurate worker placement game, players take turns directing the cellular action, like placing workers on available organelles and collecting resources.  Players then invest those resources detoxifying the cell and building enzymes, hormones, and hormone receptors all of which score health points.

As the tide changes on the island of Miaui (MEOW-ee), it’s
time for the fishing festival, a competition where the most skilled divers try
to bring back the most valuable fish from the lagoon for the evening feast. All
kinds of fish are served at the feast, but beware the gooey jellyfish and the
thieving seagulls!

Miaui is a cute family card game for 3 to 6 players that is played over 12 rounds. The
lagoon’s fish are stocked at the start of each round.  Each
player chooses one diver card from their hand and places it face down near the
board. The numbers on the cards show how deep a player is diving that round; a
“1” is a very shallow dive, while a “12” is the deepest dive you can do. When
everyone has chosen a card, all players flip their cards face up to reveal how
deep they chose to dive. The
diver card with the highest number wins the deepest catch from the lagoon and discards their diver card
face down. Resolve the remaining played diver cards in the same manner. Each round is played in the same manner with the final card left in your hand being played on the last round.
The player with the most points wins.

Included in the lagoon’s stock of fish are jellyfish and seagulls. Players must be careful to avoid these.  Jellyfish are quite tough and chewy; they are worth either −10 or −15 points. However, if a player can accumulate 3 of them they can then discard them from pile of fish.  Seagulls shadow divers to steal their fish. A player must discard the fish at the top of their fish pile when they get a seagull.

New Game Expansion
Madame is the newest and tenth scenario for the core game T.I.M.E. Stories, a co-operative narrative board game. 1673NT: Ah! Versailles. Its court.