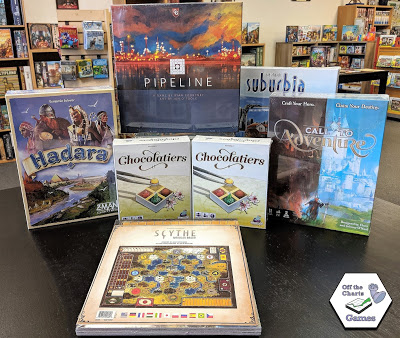 This week’s arrivals include some more new games.

New Game
Pipeline is a strategic economic board game that has players competing to build their own individual network of pipelines.  During the course of the game they will purchase, refine, and sell various types of oil.

New Game
Hadara is a two to five player civilization building game with an innovative card selection system.  Players strategically select allies and develop new technologies to build their strength, culture, and prestige as they grow their civilization through the epochs of human history.  The key to advancing your civilization is recruiting people from many different cultures to bring their knowledge and skills in and expand your new empire. Will you focus on military strength or will you bring in merchants to focus on wealth? 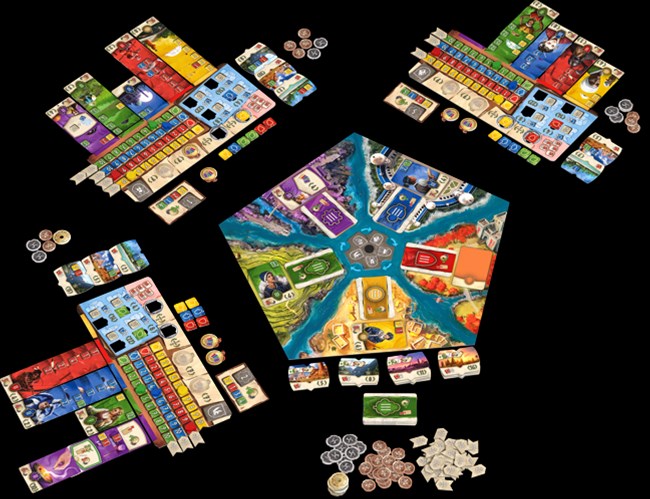 Hadara features a unique card selection system. In the center of the board a rotating wheel has five creatures: a dragon, a pegasus, a lion, a monkey, and a scarab, each representing a player’s civilization. During each epoch, players will draw from the deck that their civilization’s symbol on the wheel is pointing to. Then the wheel will rotate, offering new opportunities for each player. The cards you choose will allow you to increase your income, claim colonies, complete statues, feed your populace, or give you unique effects for the game ahead. When drawing cards and choosing who to recruit for your civilization, you must think carefully and make tactical decisions.

New Game
Chocolatiers is a family friendly card game with elements of card drafting, set collection, and pattern building for two to five players. Players take on the role of chocolatiers boxing up chocolates to make a decadent chocolate sampler. They will draw chocolates from the Share Tray and turn them in to fill
boxes. When creating their sampler, they must make sure to choose boxes that will fit well in their arrangement. Bonus points are earned for grouping various chocolate types together. At the end of the game the player with the most points wins.

New Game
Call To Adventure is a one to four player hero crafting game that can be played  competitively, cooperatively, or single player.

Call to Adventure features a unique “rune rolling” system for resolving challenges, a point-based system that encourages storytelling, and over 150 unique cards. Players begin each game with an origin card that provides their back story as well as two “starter” abilities. Each round they may either acquire trait cards from the board or face a challenge. Challenges each have two possible paths a player can choose from. For example, players who encounter the Thieves’ Guild may choose to train as a spy, or train as a killer. Each challenge has a difficulty that must be overcome by rolling successes on carved runes. The more a player has of the abilities required to overcome the challenge, the more runes they will be able to cast.Failed challenges lead players to acquire experience points that may be spent to “push” through tougher challenges. But beware, while some negative experiences will help your hero grow, too many tragedies set them on a dark path.As players’ heroes grow in ability and experience, they move on to harder challenges, eventually facing deadly adversaries and acquiring more and more destiny points. The player whose hero has the highest destiny score wins the game.

New Expansion
The Scythe Modular Board adds a new level of variability to Scythe, with the map (double-sided board and 4 big double-sided tiles) and the faction locations (home base tiles) changing every time you play. The modular board adds a drafting element to setup, along with a variant for a tighter map at low player counts.
This is a completely new board designed specifically for the tiles. Both the board and the tiles are double-sided to maximize variability. When you play Scythe with the modular board, you will not play with any other version of the Scythe board.