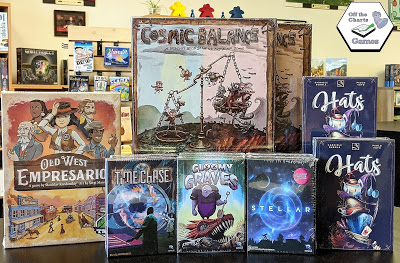 Here’s a look at the exciting games that came in recently:

You have an invitation at 5 pm at the Mad Hatter’s garden.  The table is ready, the cookies taste like buttery heaven, and the tea is strong and spicy.  More sugar?  The Mad Hatter gives you a bizarre look. “Yes pl...”    Time’s up!  He interrupts you.  Sugar, cookies, and millions of hats fly everywhere. Tea spills all over the tablecloth as he proceeds with a huge smile on his face.

It’s time to play a game!

In Hats, players compete to acquire the  most outstanding hats by exchanging cards in hand with cards on the tea table board.  Each card exchange influences how each hat is scored.  Players earn points for the hat cards in their collection based on the position of the matching type on the tea table board. Each player reveals the final card in their hand as their “favorite hat” type. Players gain points equal to the sum of all cards in their collection that match the type of their “favorite hat” minus the value of the final card in their hand.

Also, having the most different types of hats at the end of the game awards you the last cookie worth 5 bonus points.  The player with the highest final score will be declared the maddest.

Old West Empresario is a town-building game with dice drafting and engine building mechanics for 2 to 4 players.  Players take on the role of an Empresario, building a prosperous town in newly settled western territories. They will need to attract settlers through clever dice drafting and tile placement.

New from Renegade Games are these three new games:

In Gloomy Grave, 2 to 4 players work as a gravediggers in this dark fantasy world card game.  Players will need to fill their personal crypt with 5 types of corpses.  the object is to match those with the same type of corpse in the communal graveyard.  Players add to both their personal crypt and the communal graveyard on each turn. Both your crypt and the communal graveyard have specific rules of placement.  The corpses of pixies, goblins, unicorns, cyclops, and dragon have begun to pile up, so out got your work cut out for you.  Only the clever gravedigger will rule the Gloomy Graves.

Stellar is a strategic 2-player card game in which you are stargazers, calibrating  your telescopes to bring into view celestial objects of various types: planets, moons, asteroids, interstellar clouds, black holes, even satellites.  Each player uses cards to develop their own telescope and fill their own notebook.  In each round players are dealt 2 cards and will play one into their notebook and place one in their telescope.  The game ends after 12 rounds.  The challenge is to fill your notebook with sequential numbers of the different types of objects while your aligning your telescope to have the highest value of printed numbers in the different sections.  Your notebook score is based on the total number of stars in your telescope multiplied by the largest sequential set of that same type.  With your  telescope you are trying to win majority bonus points over your opponents.

Time Chase is a trick-taking game with a time-travel twist for 3 to 6 players.  Unlike other trick takers, this one allows players to go back in time and effect the outcomes on previously played tricks, known as events. The first player to control three events in the timeline wins.

Cosmic Balance is a game of battling gods, angels, and demons for 2-4 players.

Summon your Mortals to capture territories and destroy your enemies. Before playing, each player selects two god powers and factions. God powers are special abilities that break the rules and factions are the cards that make up each player’s deck, such as vampires, knights, wolves, merchants, farmers, giants, shepherds, or thieves.  Your cards become the fighting units that conquer and control territories. Gain Good or Evil when you send enemy cards to Heaven or Hell on the Cosmic Balance scale. Choose carefully, as those souls can tip the Cosmic Balance, and bring forth hosts of Angels or Demons to conquer more territories.