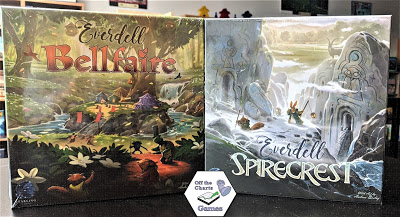 Spirecrest is one of the two newest game expansions for the Everdell, a tableau-building and worker placement game for one to four players.

Far beyond the comfortable boundaries of the Everdell Valley, deep into mysterious and uncharted lands, adventure is waiting to be discovered. Ancient ruins? Critters from foreign lands? Giants? Gather your traveling supplies and your courage, and get ready for a daring journey through the mountains of Spirecrest!

You will begin the game with a rabbit Traveler on the Mountain board. Every season you will have to face challenging weather that will alter how you are able to play. As the seasons change you will move your Traveler along the trail, gathering maps to plan a final Expedition, and making amazing discoveries. Smartly utilize the unique abilities of your Discovery cards, carefully plan for your endgame Expedition, and the story of your city—as well as your epic journey—will be remembered in Everdell for many seasons to come!

Spirecrest’s components include: 30 Discover cards, 12 Weather cards, a mountain board, 30 map tiles, and figurines of foxes, rabbits, big critters, saddles, and a frog ambassador.
~ ~~ ~ ~~ ~ ~~ ~
Bellfaire is the other new game expansion for Everdell that arrived.  It’s a year-long celebration of Everdell’s 100th year anniversary courtesy of the king and queen! So come one, come all, as the Bellfaire expansion takes the game up to 6 players.  A new flat Bellfaire board with an added new market location can be used in place of the 3D Ever Tree and market board.  There are unique player powers, new event cards and Garland Awards.  The Garland Awards represent shared end game goals with first and second place prizes.