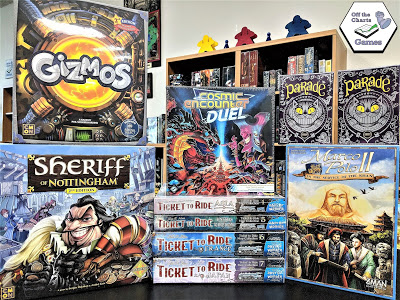 Oooh exciting game arrivals this week with a new 2-player game, games and expansions that have been missing in action for awhile a couple that are now back as a 2nd Edition.  Let’s take a look at what was in the boxes:

New from Fantasy Flight is Cosmic Encounter Duel, a competitive 2-player game that plays in 30 minutes.

Welcome to the fantastic universe of Cosmic
Encounter, where beings of all types, from tall and
wide to small and multi-eyed, have appeared in all
their glory to populate a strange and quarrelsome
galaxy of alien adversaries.

The Cosmic Citizenship Council has announced it will allow two new alien species into their ranks, but they forgot to make two copies of the filing form, meaning only one species can join!  Now, the two candidates must battle for control of a minimum of five planets to prove that they truly deserve the right to become a Certified Civilization.


Cosmic Encounter Duel is an original game in the Cosmic Encounter setting where two players play as alien species with special abilities, clashing and contending in crazy contests and climactic challenges.

Each alien species comes equipped with their own unique abilities that play with the game mechanics in some way, offering you an edge in the fight…. How your game of Cosmic Encounter Duel plays out will inevitably be affected by which powers each dueling species has and how they play off of one another.

In addition to your unique species and their ability, you have a collection of twenty spaceships that you can use to traverse across the cosmos and maintain control over the five planets you need to become a Certified Civilization. As long as you have a ship on a planet, you have control of it, even if your opponent also has ships there and you must share control. You will be able to deploy these ships to fight in duels, act as reinforcements, or draw them back for a tactful retreat. Just be careful not to lose them to the Warp or let them be claimed by the black void between the stars and end up lost in space forever!

The players compete to be the first to control five planets. Players try to win planets by using cards in their hands and the powers of their allies. The first player to seize control of five planets is the winner.

Missing in action for awhile, Sheriff of Nottingham is back in a 2nd Edition that is now from publisher CMON.  The 2nd Edition is now a 3 – 6 player game that plays in about about 60 minutes.  Not only have they included the 6th merchant to take it to 6 players, but the Black Market and Sheriff’s Deputies (expansions to the 1st edition) have been added as well.

Sheriff Of Nottingham is still the fun game of bluffing, bribery and smuggling.  Players are merchants that want to make as much profit as they can by delivering their goods to market.  Players take turns assuming the role of Sheriff, who must decide which merchants pouches to inspect and which to let pass without inspection.  The merchant’s goal is to convince the Sheriff as to what may be in their pouch of goods using any means necessary. A little bribery here, a little bluffing there as their pouches may contain contraband.  At the end of the game, the player with the most wealth wins.

Gizmos is also back in stock, now in as a 2nd Edition. In this 2nd Edition CMON has upgraded the energy spheres dispenser to a newly designed plastic one.  Additionally it has been awarded the Mensa Select Seal.  Gizmos is a 2 – 4 player clever engine-building game that plays in 40 to 50 minutes.

In Gizmos, players take on the role of contestants in the Great Science Fair. They will pluck energy marbles from the innovative plastic Energy Dispenser and use them to construct new Gizmos, adding them to their machines. Players will have to plan ahead as they build, since Gizmos can chain-react off of one-another. As more Gizmos are added, more reactions can trigger, creating some truly epic turns. In the end, the player with the most Victory Points is declared the winner.

Play as competing merchants as you set out from Beijing to seek your fortune throughout the khan’s vast empire. Travel from city to city establishing trading posts, taking new contracts, and acquiring camels and goods to complete them. But plan carefully—you’ll only make it so far without the right credentials. New guild seals will give you access to otherwise inaccessible routes, and upgrading them will bring you additional rewards. Whatever path you choose to take, you’ll have to act decisively. Some action spaces are limited, and if an opponent gets there first, it could be a longer journey than you planned for.

With a wide range of new components, characters, and actions, Marco Polo II provides a unique challenge for new players and veterans alike. Books replace the Grand Bazaar, varying your options for available goods, coins, and camels from round to round. If the selection isn’t to your liking, take advantage of jade: the rare and valuable new good can be used in place of coins and camels, in addition to fulfilling contracts as normal. To take new contracts, however, you’ll have to acquire them from cities on the board where you’ve established a trading post. Travel widely, plan shrewdly, and complete contracts to accrue wealth and fame. From your first footfalls out of Beijing to your prodigal return to the West, you’ll have to prove your skills as a merchant to write a lasting legacy.

Continue to check in for the latest in board games.
~ ~ ~~ ~ ~~ ~ ~~ ~ ~~ ~ ~~ ~ ~~ ~ ~~ ~ ~~ ~ ~~ ~
Located at 30 NW 2nd Street in Historic Downtown Gresham. We have a full range of family games, strategy games, Euro-style games, war games, card games, dice games and more. Also for the puzzle enthusiasts we carry quality jigsaw puzzles from Ravensburger, Cobble Hill, Pomegranate, White Mountain, and Dowdle.
We proudly serve Gresham and the greater Portland and Vancouver area.