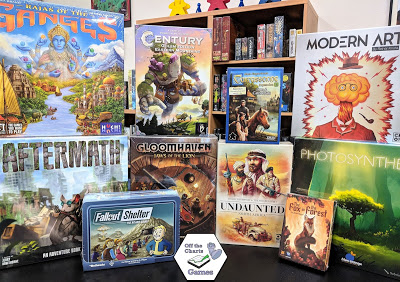 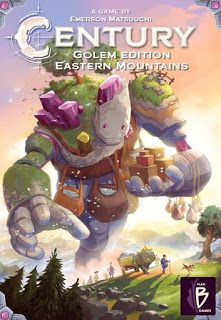 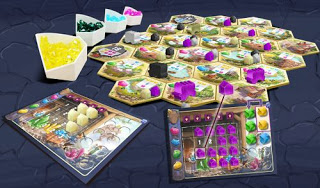 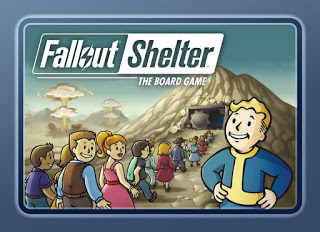 New from Fantasy Flight Games is Fallout Shelter: The Board Game, a post-nuclear survival game – –  2 to 4 players – – 60 to 90 minutes play time.
publisher description
Fallout Shelter: The Board Game is based on the hit mobile game from Bethesda Softworks, Fallout Shelter sees you take on the role of a vault officer fostering happiness among the citizens of your vault. With the election of a new Overseer looming, the officer who can gain the most happiness among the dwellers is sure to lock up the election and attain victory.  As an officer, you’ll have to direct your dwellers to where they’ll spend their time in the vault, whether it’s spending some time relaxing in the lounge, gathering vital resources like food in the community gardens, or battling a radroach infestation in the game room. The choice is always yours, but remember, you’ll have to balance happiness and efficiency to lead your people to a brighter future underground!
Every game of Fallout Shelter will begin with the same basic setup for your exciting Vault-Tec Vault! But don’t worry, your vault will grow in surprising new ways as you construct rooms for your dwellers to visit. Your job starts small, assigning two dwellers at a time to their daily tasks, but with proper planning that number can grow to seven dwellers working under your inspired leadership. The tasks that your dwellers will take on are represented by spaces spread across the vault.
New! 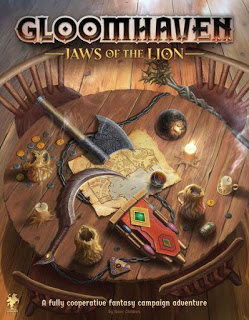 Gloomhaven: Jaws of the Lion players will assume the roles of hardened mercenaries and work together to fight through a campaign full of choices, challenges, and twists.  Each scenario offers stream-lined tactical combat without dice against fully-automated enemies, where using the right ability at the right time can mean the difference between success and failure.  The game includes 2 scenario books, four playable minis – each with their own decks and character sheets, 16 unique monsters – each with standee and decks, and more. 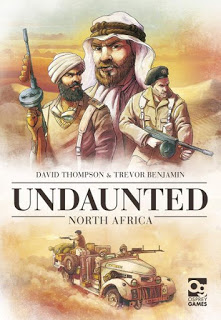 Undaunted: North Africa is a sequel to Undaunted: Normandy by designers David Thompson and Trevor Benjamin for Osprey Games.  Undaunted: North Africa is a 2-player campaign-driven deck-building game of tactical World War II combat played in 45 to 60 minutes.
In this stand-alone game, each player will use their cards to seize the initiative, bolster their forces, or control their troops on the battlefield.  Suffering casualties will result in card losses to their decks.   The game introduces vehicles, new forces, actions, and objectives, deeper asymmetry, and eleven new scenarios.
~ Restocks ~ 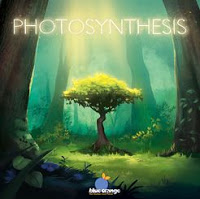 Abstract strategy game – –  2 to 4 players – – 30 to 60 minutes play time. Plant and shape the ever-changing forest as you cultivate your seeds and your strategy. 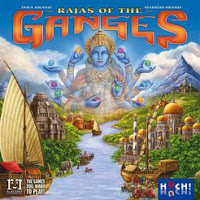 Rajas of the Ganges.

A worker placement, tile placement, and race game  – –  2 to 4 players – – 45 to 75 minutes play time.  Develop your province with the help of your workers and the clever use of your accumulated dice. In the end, you must win the race with a combination of wealth and fame. 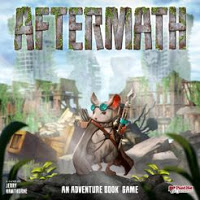 layers take on the role of small critters struggling to survive and thrive in a big, dangerous world. 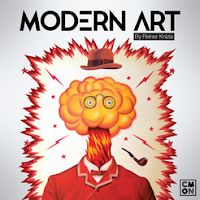 Buying and selling paintings can be a very lucrative business. Five contemporary artists have produced a bunch of paintings, and it’s the player’s task to be both the buyer and the seller, hopefully making a profit in both roles.

Fox In The Forest.  A

2-player trick-taking game – – 30 minutes play time. Utilize the special abilities on the Fairy Tale characters to change the trump suit, lead even after you lose a trick, and more.