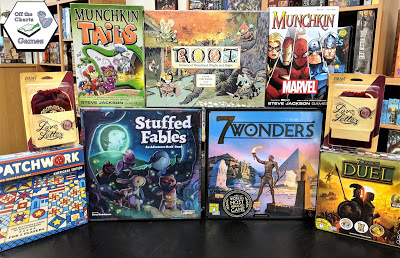 New In A Series!
Munchkin has gone to the dogs . . . plus foxes, mice, and ponies!
Adding to Steve Jackson Games’ popular Munchkin series card game, is Munchkin Tails.  Unexpected pitfalls await in this role-playing card game where hunting for treasure, lining up Allies, collecting Items, and potential backstabbing is all part of the fun and race to be the top.  – – 3 to 6 Players – – 60 to 120 Minutes Play Time.
publisher description

Anthropomorphic animals have always been popular, from the beast-headed gods of Egypt to Mickey Mouse and Bugs Bunny today. Now you can bring them into the dungeon, fighting off opponents such as the Human Rights Activist, the Robot Vacuum, or even the feared Animal Control Enforcer. Use a Tail Flail or a Cone of Defiance as you work to be the first of your species to reach Level 10!

As with the original Munchkin and all of it’s themed editions, Munchkin Tails can be played as a stand-alone game or combined with other Munchkin card games for a truly crazy game play.

7 Wonders is back in stock in a 2nd Edition. Same great game of card-drafting and set collection themed to the 7 Wonders of the World now with updated artwork.

With Americana-styled quilting pieces, each player will work to complete their 9×9 quilting board before time runs out.  On their turn a player will choose a tile to purchase, place in their quilt, and move along the time track.  Each tile indicates it’s cost, it’s button income value, and how much time it moves that player on the time track. Buttons are currency in the game.  You pay for your pieces in buttons and you receive income in buttons.  The player with the most buttons at the end of the game is the winner.