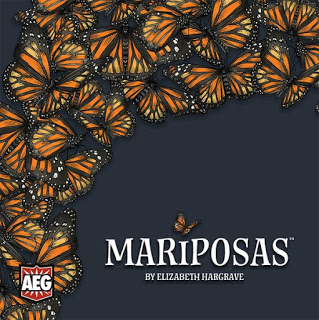 Publisher:  AEG, 2020
Players:  2-5
Time:  45-75 Min.
Mariposas is a boardgame about the migration of the Monarch butterflies from
Michoacán Mexico to as far north as Winnipeg and Quebec City, and then back
again to the Michoacán area.

Mariposas begins with set collection of flowers, but not for victory points but
to spend to hatch additional butterflies.
Using movement cards, butterflies are moved across the map to gather
flowers, hatch butterflies, and explore waystations.  The migration takes off from Michoacán and lasts
three seasons: spring, summer, and fall.
Each season will bring a different mid-game goal card (drawn
randomly).  Spring season’s goal card is
revealed at the start of the game.
Summer and fall’s goal cards are revealed either at the start of that
season or earlier if enough butterflies have been hatched.  The objectives on these goal cards are mostly
scored at the end of the season.  Each
player begins the game with a single generation 1 butterfly.  During spring season, this butterfly can
hatch up to two of that players’ generation 2 butterflies.  These generation 2 butterflies then can hatch
up to three generation 3’s and the generation 3’s can hatch up to four of the generation
4’s.  At the end of spring season, all generation
1 butterflies are removed from the game.
The same goes for the summer and fall seasons: generation 2’s and generation
3’s are removed respectively.

The object of the game is to gather the most points.  Points can be gained several ways and are not
easy to obtain.  One is by fulfilling any
of the various conditions on a seasonal goal card.  Fulfilling these objectives by the end of
that season is a challenge.  They tend to
drive players to scatter their butterflies further north and east, farther away
from Michoacán.  Another way to gather
points is by collecting life cycle cards gained by visiting waystations.  Waystations will yield either a particular life
cycle card or an additional movement benefit. Collection of a complete set of a
particular color of life cycle cards will yield points or a special ability. Additionally,
each card is worth one point at the end of the game.  Lastly, at the end of the game score points
for the number of generation 4 butterflies that made it back to Michoacán.

Mariposas is a game like no other.  It has
2 types of set collections: One, in flowers to pay for hatchings and Two, in
life cycle cards worth end-game points.
It uses intermediate scoring goals to direct your migration north and
east which forces you to race back south as fast as possible for significant game
end points.  With the tiles at
waystations randomized and face down, randomized seasonal goal cards: one of 5 for
spring, one of 10 for summer, and one of 5 for fall the game provides a lot of
replay value.