For those people who love network building games, Railways
of Nippon takes the networking of Ticket
To Ride and adds some serious economic elements, some
auction bidding for player order, and a whole lot of interesting decision
making.  The object of the game is to
earn the most points by building rail lines across a map of Japan to deliver goods
cubes of different colors to the appropriate cities.  Cubes travel across completed lanes from city
to city on tracks that can be expensive to build.  Distance is limited by the power of your
engine.  For a price, engines can be
upgraded.

Each round starts with an auction bid for first player.  There are times when going first will be
essential for a player to build before everyone else, or to move a goods before
another player takes it a different direction, or to grab a particular railroad
operations card that is now available.  A
new card is revealed at the start of each round and they can provide some great
special abilities.  After the auction,
each player gets three actions to build, move, etc., at one action at a time in
turn order.  After three actions income
is rewarded for how far a player has progressed on the income track.  Moving up the income track is accomplished
primarily by delivering cubes on your rail line.

Money is more than a little tight.
It must all be borrowed from the bank in $5,000 bonds.  Each of these bonds cost a player interest during
the income phase and points at the end of the game.  Borrow too much and a player could struggle
getting enough income.  Borrow too little
and a player could be left behind by more aggressive players.  It is a great balancing act.  Game end is triggered when a certain number
of cities have been completely emptied of goods cubes.

Railways
of Nippon brings a great deal of replay value.  The goods cubes are placed randomly at the
start of the game.  Since cubes must be
delivered to a city of the same color, purple cube to purple city, etc. each
game will play different from the last.
If you are looking for network building with some serious head
scratching economics, Railways of Nippon may fit the bill. 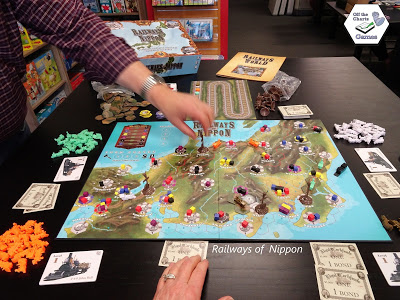