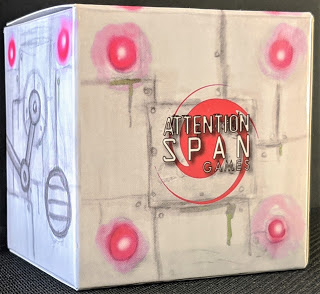 Replicants is a small card game about building the best set of robot workers,
called Replicants.  Each replicant has
four levels with each new level bringing points and a new ability at its level
4.  Each player begins the game with one Replicant
set at level 4 and three Replicants set at level 1.  These will be selected from a hand of five
cards dealt at the start of the game.

Mechanically, the game play is straight forward.  Each round a grid of various resource cards is
laid out in the center play area randomly.
Each player, in turn order, will place one of their four drones on the
grid to acquire two of the resources.  Play
continues until all players have played their four drones.  In the next phase, using their resource
cards, players can upgrade as many Replicants as they desire.  Any Replicant upgraded to level 3 gains the
player an additional Replicant from the draw deck.  The cost in resources to upgrade each
Replicant is different and clearly visible on the Replicant card.  To upgrade to level 2 costs two specific resources,
four resources are required to upgrade to level 3, and six are needed to
upgrade to a level 4.  The object of the
game is to be the first player to gain 36 victory points.  Level 1 Replicants have no victory point
value, level 2 Replicants are each worth 1 victory point, level 3’s are 3
victory points, and level 4’s are worth 6 victory points.

Replicants comes packaged in a really small box with plenty of cards to handle up
to six players.  This game plays much
bigger than the size of the box suggests.
Another plus is that designer Will Carson is from the Seattle area. 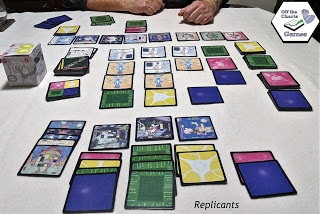