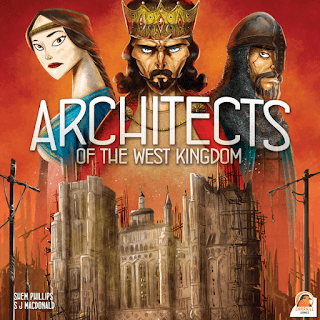 Architects Of The West Kingdom is all about becoming the best builder of them
all!  During the game players will construct individual buildings and work to help construct the cathedral.  This will be accomplished by placing workers to gather resources, hire apprentices, select buildings, or even visit the black market, the town center, and the guardhouse.
Managing money is a challenge.  Things can be expensive in the West Kingdom.  Some ways to get money are not on the up and up.  Use those methods and you lose virtue which can cost you points at the end of the game.  It can also prevent you from working on the cathedral.  On the other hand, bring being virtuous can score positive points at game end, however, it can keep you from visiting the black market.

Architects Of The West Kingdom presents players with lots of choices.  Each player starts with 20 workers and eleven different places on the game board to place them to initiate actions.  Each turn consists of playing one worker and taking the corresponding action.  Workers can be used to double up or enhance previous actions.  For example, place a worker in the quarry and collect a stone.  Later place another worker in the quarry along side your first worker to collect 2 stones.  A third worker later will yield 3 stones.  But wait!  Now you are too strong at the quarry.  One of your opponents places a worker in the Town Center which allows them to capture all of your workers in the quarry and place them on their player board.  Later,
they can sell them to the guardhouse for much needed money.  It is expensive to release workers from another players’ board, or you can wait until they are sold to the guardhouse
where you can get them back with a worker placement action.

One of the most critical actions is go to the workshop.  There players can recruit apprentices and acquire buildings to be built on a later turn.  Some buildings require certain types of apprentices to be hired before they can be constructed.  Players will go to the workshop many times.  Yes, workers can be captured from the workshop too, as well as from most locations.  The game flows back and forth with players gathering, building, and capturing throughout.
Game ends is triggered when a certain number of construction actions have been taken.  These include both the construction of players’ buildings and contributions to the cathedral
construction.  Points are awarded for buildings, steps on cathedral construction, and either plus or minus points depending on a players’ positive or negative position on the virtue track.  The player with the most points wins.

Architects Of The West Kingdom is a stand out when it comes to player interaction.  Your workers are going to get captured multiple times.  You will also do your fair share of capturing others.  It is a way to gain much needed money.  In this game, the capturing does not feel all that negative.  Having 20 workers and many places to go and multiple ways to gain points provides plenty of replay value.  The board and components are well done.  The game really shines at 3, 4, and 5 players.
~ ~ ~~ ~ ~~ ~ ~~ ~ ~~ ~ ~~ ~ ~~ ~ ~
Continue to check in for the latest in
board games and jigsaw puzzles.
~ ~ ~~ ~ ~~ ~ ~~ ~ ~~ ~ ~~ ~ ~~ ~ ~
Located at 30 NW 2nd Street in Historic Downtown Gresham. We have a full range of family games, strategy games, Euro-style games, war games, card games, dice games and more. Also for the puzzle enthusiasts we carry quality jigsaw puzzles from Ravensburger, Cobble Hill, Pomegranate, New York Puzzle Company, White Mountain, and Dowdle.