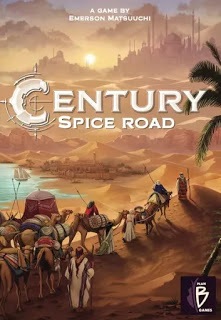 Century
Spice Road is a game about trading spices on the way to
providing spices in the right mix to satisfy customers and gain points for
doing it.

Century
Golem is a re-themed version of Century
Spice Road, only you are traveling the golem road for
crystals to deliver and gain points from those deliveries.

The game mechanics are quick to learn and easy to teach.  Spices come in four flavors represented in
color cubes.  They start with yellow
(turmeric) and become progressively more valuable as they are traded up to
green (cardamom), to red (saffron), and finally brown (cinnamon). In the
central play area there will be a row of five face-up customer cards with spice
requirements and a stated victory point value.
These will be replaced as they are claimed.  Next, there is a row of six face-up merchant
cards – also replenished as they are taken.
Merchant cards are played to either upgrade or trade spices.  On a turn, you may take one of four possible
actions: You can play a card from your hand to take its action (upgrade or
trade).  It then goes in your own discard
pile.  You can take a new merchant card
from the central row of six face-up merchant cards currently available and add
it to your hand.  You can claim a claim a
customer/point card by discarding the required spice cubes.  Satisfying a customer from the first or
second slot can yield a gold or silver coin worth end game points.  Or, you can pick up your previously played
merchant cards that make up your discard pile and add them back into your
hand.  Play continues in this manner to
the end of the game.  The game ends when
a player has gained 5 or 6 customer/point cards depending on player count.  Add up the points from customer cards (they
range from 6 points up to 20 points).
Add in points for any gold coins and silver coins gained.  Then add a point for each non-yellow spice
cube left in your inventory.  The player
with the most points is the winner.

Century
Golem features exactly the same game play with fantasy
artwork and crystals rather than spice cubes.
The crystal colors are slightly different, moving upward from yellow to
green to blue to pink.

The secret to success in both Century Spice Road and Century Golem is building the right set of merchant cards that work in unison to accumulate spices/crystals faster and more efficiently than your opponents.  Even though this game requires good decision making, it flows smoothly and quickly.  This game works well for both gamers and non-gamers alike.